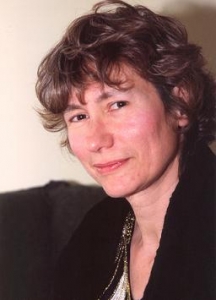 Born Chesterfield, Derbyshire 1952, of English and Dutch-Indonesian parents. My father's family were miners and farmers in Derbyshire, although he became a teacher.  My mother lived in the Dutch colony of Indonesia until the Second World War, and met my father after being liberated from a Japanese concentration camp.  I have one brother.  We lived first in Derbyshire, then Lincolnshire and finally moved to Somerset. I grew up in the country and had freedom to roam, although the agribusiness was already changing the landscape. My secondary education was at Grantham Girls' Grammar School, where I rebelled against the rounded vowel, and later at Minehead Upper School.

My defining moment in poetry came in 1969 when I first read Ezra Pound's 'Lustra'. My poetic and political interests developed as an undergraduate in the 70s at the University of East Anglia (UEA), studying American literature and history.  I also spent a year in the United States at Franklin & Marshall College where I wrote about contemporary American poetry.  However, in the States I realized that I was European and not just English, and decided to learn more about  European poetry.  My MA thesis at the University of Sussex compared Ezra Pound and Guillaume Apollinaire, and their response to the visual arts.  It was followed by a year at the University of Neuchatel, and research in modern French poetry and surrealism.  Returning to UEA, I completed an M Phil, which was a critique of the contemporary French poet Yves Bonnefoy, and of 'logocentrism' in French poetry.

In 1980 I moved to London to work as a librarian, and later specialized in research and information for community development and anti-racism projects.  More recently I worked part time for the national Poetry Library.  I joined a housing co-operative in North London, which is where I still live.  Although I had been writing throughout the 70s, and publishing in university arts magazines, my own writing and performance came into focus in the 80s.  I was involved in the Sub Voicive readings in their various incarnations, and it was through these that I met my partner Gavin Selerie.  I was a member and later co-ordinator of the Islington Poetry Workshop.  I was also closely involved in the small press North and South, with Peterjon and Yasmin Skelt and David Annwn.  North and South published my first collection of poems and prose: The Sex of Art.

In the early 90s I established my own small press, the Other Press, and published my second book Hula Hoop.  Ian Robinson, of Oasis Books, published my third collection, Linocut in 1997.  I embarked on a major collaboration and performance with the artist Irma Irsara, based around the fashion industry and women's clothing, and part of this project is available in book form as Automatic cross stitch (Other Press, 2000).  I also collaborated on an innovative simultaneous email text and performance with the poet Elizabeth James – Neither the One nor the Other (Form Books 1999).

Somerset Letters (Oasis, 2002), which began as a collaboration with the poet Elaine Randell, experiments with the prose poem, as well as exploring the themes of landscape and rural communities. The sequence Paravane originated with discussions on the How2 editorial board post 9/11, but then focused on the IRA bombsites in London.  It was published  as part of New and selected poems, 1996-2003, from Salt.  Since then I have worked on other landscape sequences: Myne (Shearsman, 2006) takes its title from the old name for Minehead in Somerset.  Lines of Sight (Shearsman 2009) includes an approach to Neolithic stone sites on Exmoor, part of a multi-media collaboration with Tilla Brading, published as Stone settings (Odyssey, 2010).  My current project, Halse concerns trees and tree names and ‘halse’ is Exmoor dialect for hazel (published by Shearsman in 2014).  My latest book is An Alphabet for Alina (Five Seasons, 2012), a collaboration with artist Peterjon Skelt, which exploits the lexical and visual possibilities of a girl’s alphabet.

I have also written various reviews and essays, about my poetic practice and that of other poets, especially British women poets (see bibliography).

This recording was made by Penelope Woods at the British Library on 14 May 2008.

a green coat for the quartz
a pelt
let us pelt

the naked boy
rests into the stone
put him up against

what did he say

two bodies that prop each other up
one animal one human

we have gone down
we have gathered
we have emerged

he holds a lap
it shapes a lap

shIPS that we need?

shiplap
just the common name for over
lapping
slates    and  plates

at Naked Boy, a Neolithic standing stone on Exmoor
12 April 2007

from Lines of Sight

to insert a body a core as if

at the end of summer   corn  o tone

cactus corner a lexis can spike

can needle the finger that would

touch that would explore a corner

cupboard capacity to close to exclude

she keeps a collection that says look out

they came and cut him down

but a bloodless combine has left

three days stubble and the capacity to

cut you are too cutting and break the code

'Frances Presley's writings range from vivid human stories to a bareness where it's as though one is witnessing the process of creating language. We're invited to enter a landscape of intimate histories, past and present: the marvels and mysteries of other people's lives, their 'ordinary' lives, and the natural world that surrounds them. It's a poetry that pulls us in, that involves us in conversations and questions. There's an immediacy that makes us look again at our shared world.' -- Lee Harwood

'Presley's poems are minesweepers working below the surface to explode the breezy assumptions of Thatcherist consumer capitalism, or to explore what has already caved in' -- Meredith Quartermain

'Frances Presley's writing engages with serious political concerns underscored with deeply personal experience. The world 'out there' of unrest, injustice and conflict is not something to be compartmentalised but co-exists with the domestic on equal terms. A summer flower or childhood memory in Somerset blossoms next to the exploding horrors of semtex. She is not a poet to shy away from life but pushes language into its face until it yelps.' -- Geraldine Monk

'In Automatic cross stitch Presley achieves an intricate interstitching of voices, narratives and linguistic textures. She exploits the multivalency of the language of cloth, allowing individual words to raise questions of body politics.' -- Harriet Tarlo

‘Leading off the path: a review of Frances Presley, Myne: new & selected poems and prose’ by Clive Bush Jacket 31 (October 2006)