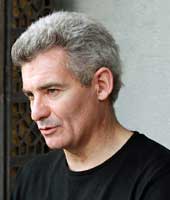 Principal of Dartington College of Arts since September 2004, following eight years as Dean of Art & Design and Professor of Glass at the University of Wolverhampton, where he had been Head of Glass for two years after a decade working in the glass crystal industry -- five years respectively in glass production at Stuart & Sons Ltd., and as Head of Design & Development at Dartington Crystal. Honorary Professor of Fine Art at Shanghai University since 2000. Visiting Professor, University of Plymouth.

The recording was made on 17 January 2007 at a house in Stamford Hill, north London.

From 'Raag Leaves for Paresh Chakraborty'

Published work includes Sirius and Cade l'uliva (Poetical Histories, Cambridge 1995 and 2003) and inclusion in FOIL: Defining Poetry 1985-2000 (Etruscan Books, 2000). Work has appeared in The Gig (7 & 16); Sneak's Noise (infernal Histories/Poetical methods, Cambridge 1998); and Two Entangled Events (2005). 'The hour the swallow keens, a translation of Dante Alighieri, Purgatorio IX, appeared in A Meeting for Douglas Oliver (Cambridge, infernal methods/Street Editions/Poetical Histories, 2002); and three poems under the title 'Da'ud' can be found online at /seconds issue 04. A lyric sequence, Raag Leaves for Paresh Chakraborty, will be published by Wild Honey Press in 2007.

Review of FOIL by Tim Allen at Terrible Work