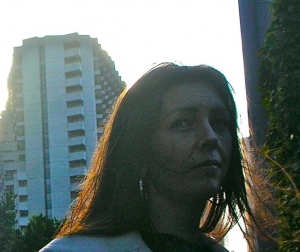 Born in Queens, New York, my love of poetry began at a young age and ignited while studying at University of East Anglia in Norwich. Following a mentorship with Lee Upton at Lafayette College I earned my MFA at George Mason University with Carolyn Forché as my advisor, during which time I became involved with the very vibrant poetry community in Washington, DC, organized by Mark Wallace, Rod Smith, Buck Downs, Joe Ross, and Heather Fuller.

I am a founding member of the subpress collective, with whom I published Fractured Humorous by Edwin Torres. I lived in NYC from 2001-2009, during which time I was a workshop leader at The Poetry Project and I served the arts newspaper Boog City as poetry editor and, with Jen Benka, as politics co-editor.

As of 2011, I live in San Francisco, California, where I am on the Board of Directors at Small Press Traffic and a member of Nonsite Collective.

The following recording was made at the Contemporary Women's Experimental Poetry festival, held 6-8 October 2006 in Cambridge, UK and organised by Emily Critchley with help from Catherine Brown.