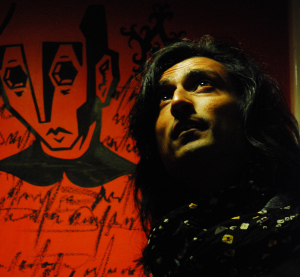 Avaes Mohammad was born in Blackburn, Northern England.  It was whilst completing his Chemistry Doctorate at Manc­­hester University that he found his voice as a poet, writer and performer.  Inspired by or even in spite of the riots of 2001 and the events of 11th September, Avaes committed himself to his journey as an artist.

Artist-Alchemist, Avaes developed his own voice with influences stretching from the Sufi-Saints of South Asia to the Dub-Poets of Jamaica and has since performed his poetry on stages worldwide. Appearing extensively on Radio, his poem Bhopal was commissioned by BBC Radio 4, going on to win an Amnesty International Media Award.

As an essayist his writings have featured on a range of platforms covering topics from arts and media to social integration.  An effective workshop facilitator, he has worked with The Royal Court Theatre, English PEN, British Council and the Alternative Living Theatre (India).  In 2012 he co-founded The Lahore Agitprop Theatre Company in Pakistan.

Avaes Mohammad is currently Associate Artist with Red Ladder Theatre Company, Fellow of the Muslim Institute and Trustee of the Bhopal Medical Appeal.