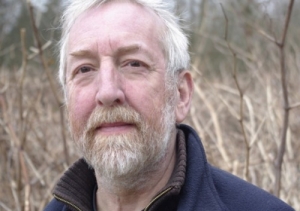 Gerry Loose lives on his boat near the Faslane Nuclear Submarine Base on the Clyde. His work includes poems made for precise locations in Botanic Gardens & other public places, inscribed on stone, wood & plant labels, to be read on site.

Recordings here were made in Glasgow by Iñigo Garrido on 19th March 2007, and are all included in Printed on Water: New & Selected Poems (Shearsman Books April 2007).

Military necessity permits actions that might otherwise be ethically questionable

tunnel from one world
to another
spiral into voicebox

NO WEAPONS OF ANY KIND
TO BE BROUGHT IN HERE

"Intimate and personal, public and global: a consistent philosophy and personality at work through history, an individual in specific contexts, tilling the contexts with implement and word. Addressing concerns from positions ancient Celtic to contemporary nuclear arms race: invocation, iteration of the particular and passing present. A poetry of wonder, sexuality, angry wit. An important and exciting collection from a poet centred in his and our world, with none of the mind-body dualism irrelevancies that bedevil so much and so many." --Tom Leonard on Printed on Water

"Gerry Loose has produced a sequence of poems which must be among the most authentic and intense evocations of monastic experience. In these poems the monk's chant has become a rant, and then a mantra of faith driven to its extremes until it has become a curse."--Chris McKinnell on