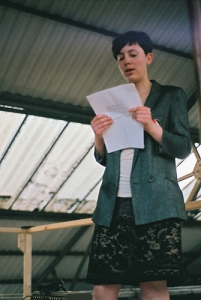 Francesca Lisette was born in Surrey in 1987. She has an MA in Critical Theory from the University of Sussex. She organised the poetry and performance series Chlorine Readings in Brighton between April 2009 and July 2010. Her poems have appeared in UK and international magazines including Axolotl, Cambridge Literary Review, Damn the Caesars and Sous les Pavés. Her pamphlet as the rushes were was published by Grasp Press in 2010. Her work will be featured in Better than Language: An Anthology of New Modernist Poetries (Ganzfeld 2011) and in a pamphlet of poems written around the student protests of late 2010 (Grasp 2011). With Jonny Liron she developed her poem Casebook: A History of Autonomy and Anger into a site-specific collaborative performance; it has been published by Mountain as Teens.

Casebook: A History of Autonomy and Anger

a poem for performance

souped in a stink of bone & brevity
what loses face to maul, what pools
love to arson, shifts light ungathered
to a narrower acid track.

'… toying with obscurity, confident measure, I think actually being deliberately secretive as a form of intimacy, or a way of controlling intimacy. The highly ornate vocabulary of her poetry establishes a strange relationship with the listener: the way I follow Lisette's work is like a grid, or aspects and planes of meaning and signifying which are constantly shifting. Maybe these grids and aspects and planes are attached to bodies, or at least a you and an I, even if those poles get repeatedly flipped and turned and examined.' - Luke Roberts

'Tensions between local and global uncertainty are too complex to tolerate any single reading as representative of their interaction. This poetry's resistances to conventions of thematic comportment - to its credit - do not display a particular attitude or theoretical position vis-a-vis "language" or "the world" towards and from which its substratum of subject(ed)-matter is co-ordinated. It is gratifyingly difficult therefore to summarise the handling of these resources as a range of tactics on the author's part. This much ensures that the question of what this poetry is about, rather than becoming sidelined by any description of its skirmishes against received structures of aboutness, remains a centrally vital question to be determined by rather than for it.' - Mike Wallace-Hadrill