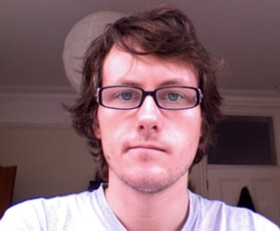 Michael Kindellan was born in Toronto, Canada, and educated at McGill University in Montreal, then at the University of Cambridge in the UK. He is currently an Alexander von Humboldt postdoctoral research fellow at the Universitaet Bayreuth, where he is working on the manuscript drafts of Ezra Pound's late Cantos, and is the author of several chap books of poems.

Recorded on 9 October 2006 at a house in Stamford Hill, north London.

"[Word is Born] is a terrific project, full of movement and robust -- promiscuous, I almost said -- camaraderie. I still hate poetry, after all that, but mostly because so little of it is as rewarding as Word is Born."-- Chris Goode