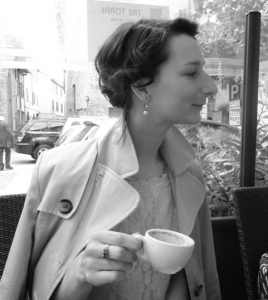 Laura Kilbride grew up in the North-East of England and is in the final year of doctoral study at the University of Cambridge, completing a thesis on the poetry of A.C. Swinburne. With Rosa van Hensbergen she co-edits the Paper Nautilus Magazine (thepapernautilus.co.uk), now in its fourth issue. Her poems have appeared in the Cambridge Literary Review, Hi Zero!, and Dear World & Everyone In It (Bloodaxe, 2013) Her first pamphlet Errata was published by tipped press in 2011 (tippedpress.com). A long poem, In The Square, is forthcoming from Punch press.

Recorded by Alastair Roberts on Friday 14 February 2014 at the recording studio at Queen Mary University of London.