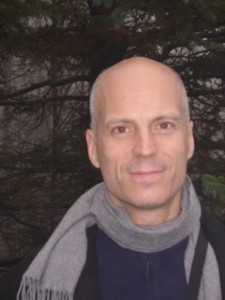 Peter Jaeger is a Canadian writer based in London. He has written poetry, criticism, ambient and conceptual texts, hybrid creative-critical research, and artist books. Jaeger is Professor of Poetics at Roehampton University.

Thanks to Ken Brake at Regal Studios.

Finding ourselves in a dark wood where the straight road no longer lay, we were often simple. Walking in order to research where we were in relation to our desire, we remembered surface. Coming across two roads that diverged in a wood, we stepped into the wood. Beginning nowhere, going nowhere, and arriving nowhere, we deepened the level. Wandering lonely as clouds, we thought ourselves mannered. Investigating the difference between the fantasy and the reality of walking, we clearly saw the void. Noticing that even the best walks—like the best books—had their moments of tedium, we left off modern thought. Treading on ground inhabited by our first human ancestors, we humanized constraint. Aiming at definite, special goals (they belong to the secret category of research and are therefore not communicable), we ate our quiet ferns. Knowing that our friends and families were standing in a line and waving good-bye to us as long as they could see our backs, we overcame our fear. Embarking on foot, we wrote a new haiku. Deciding to attempt a description of our journey—a journey which since the days of the greatest of our great grandparents had not been attempted—we listened to airports. Paying our debts and making our wills and settling all of our affairs, we were ready to go. Encountering thousands of improvised pilgrimages, often unguided by the principles of a major world religion, and of varying levels of seriousness and sanctity, we entertained no one.

'Are they of the past, by the past, and for the past? This might be a way of evaluating the later-than-life productions of Marcel Proust. Thus there may be something to say for Peter Jaeger’s A Field Guide to Lost Things even though it is not one of Proust’s best […] Naturally, it is always in present time that we keep accounts; but even then the present is only a memory of an instant, and, thus, of the past, by the past, and for the past. That is one way to look at it (as Emmanuel Levinas puts it, dans le temps, déphasage de l’instant et déjà rétention de la phase séparée). Alternatively, the past of the later-than-life productions of Proust may seem not to be recovered but rather unencumbered, by virtue of their being written. Indeed, the secondarity corresponding to the non-remembrances of the unconventional textualization of Proust by Peter Jaeger, and to all the found sentences, re-involved as they are from the beautifully written Swann’s Way by CKS Moncrieff of 1922 vintage, comes out clearly; it comes out naturally for a way of reading, and so so, so, beautifully. Surely beautifully, as they are of Moncrieff’s terms (his taking and reducing and reproducing Du côté de chez Swann), and as they are the script and the direction and the cherished motivation for Jaeger’s coming upon the lost-feeling fields.' --Robert Mueller on A Field Guide to Lost Things

'What makes Peter Jaeger’s book on Cage’s Zen interests unique is its turn from Buddhist ideas to the formal innovations that Cage took to be integral to an adequate ecopoetics. Jaeger takes seriously Cage’s belief that one must study nature in her manner of operation; consequently, his book does not talk about Cagean Zen; rather, it performs it, providing us with a theatrical mise-en-scene of its processes.  Adopting Cage’s own procedural methods, based on I Ching chance operations, Jaeger presents his “topics” in a highly novel way, allowing for interruptions, silences, and incremental repetitions. In the course of Jaeger’s own “Lectures on Nothing,” we learn a great deal about Cage’s relationship to other poets and artists as well as about his particular critique, not unrelated to Lacan’s psychoanalytic one, of Western social and political organization. Himself a poet, Jaeger has produced a learned study that is also great fun to read—a delightful poetic text in its own right.' --Marjorie Perloff on John Cage and Buddhist Ecopoetics

'Peter Jaeger is one of my favourite Canadian poets, partly because in every book he seeks new ways in which a poem can be written. Family Time is ‘about’ his three children but is also a poetics lesson in various possibilities for constraint poetry […] The title poem of the chapbook, “Family Time,” is based on a very simple rule: all of the text has to have been said within the family at a documented time. It begins: “7:36 Put some maple here! 7:36 And the other reindeer? 8:04 You can have your croissant soon! 8:16 Wasn’t that a dainty dish to set before the King?  8:21 It’s not prickly you just go in there and there’s space – lots of bits of space! 8:27 Mr. Popadom Egg Rodent! 8:27 She has snake hair! 8:47 Dad, look at this! 8:47 Dad! 8:48 I went all the way here! 8:48 Seriously! 8:48 Now you have to do this one!” […] The social of course is inevitably a constraint in that interactions such as these evoke actions and responses that would not have occurred otherwise, and divert a person from others. Much of parenting is the teaching of some of the ‘rules’ of the social.' --Frank Davey on Family Time

'Once you catch the pace of Eckhart Cars, once locked in, you begin to question your sanity, you ask, is this taking me into itself or is this just kidding. It is both and then uses how it becomes to mean this, what itself reads through the reader. Near the middle, after Early Gardening, Martyrologies, you can not get a recognition of tempo-spatial finesse, it opens and closes like irregular lids revealing a variety of opportunities. When you get beyond this poem, the contrasts of these precise and different poetic texts begin to return, as pace, with the variety that human movements need.' --Allen Fisher

'The beautiful final poem of Eckhart Cars, 'A Black Tooth in Front', positions the body, its motions, postures and vehicles, relative to itself and to the earth and stars; the earth and stars are positioned relative to themselves and to the body. This is a poetry of particularity -- physical arrangements, prepositional locations, directional markers -- and a poetry of constellated possibilities. Jaeger's play with language as one of the coordinates of the material universe is familiar from Sub-Twang Mustard, but this collection is also irradiated by a new metaphysical activeness. The blood of martyrdom, the waters of profusion swell against such practicalities as price, debt, labour, imperialism and its soundbytes. The natural environment is called back from the past by its precise and radiant names. In modes ranging from alphabet and multiple to magic pastoral and folk story, Eckhart Cars pries open the apparent closure of the story with the conditional densities of lyric. The satisfactions of aphorism and speculations on the proprieties of reading are abraded by dream, wandering, fragmentation and doubt. These poems explore how making a perception present to (it)self can outrace certainty or completion, and instead retain all the routes it has travelled -- not just as memory or scholarship, but as living and passionate witness 'raised to the rank of / the world'.' --Andrea Brady

'In Eckhart Cars Peter Jaeger engages discursive production and the 'literary field' in mutually critical times that implicate a catina of paradoxes: abundance in scarcity, remainder and excess with the finite human predicament of the virtual infinity of language. But this does not seduce Jaeger into the poetics of Blanchot or the onomastic erasure of Bataille. Eckhart Cars never loses its grounding in the practice of everyday life, and the nightmares of globalism, biopolitics and neo-liberalism. In their insistently disjunctive syntheses these texts, so redolent with reflection , offer countless antidotes to the literary torpid. As one poem tells us 'All books have their sky' and in this sky we find the sentence after the New Sentence.' --Steve McCaffery

'Peter Jaeger's sprung lyrics and imaginary aphorisms have it sixteen ways: they locate the body of the text in the mirage of the text's own vanishing, yet dazzling, illusions while enunciating the discrepant fictions that bare their truths in colliding images of constant possibility and irreparable elision.' --Charles Bernstein