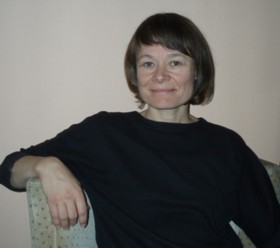 Grew up in Cardiff and now live in London, working as a librarian at the Victoria and Albert Museum. Involvements include(d): 'English Literature', art history and criticism, creative-writing teaching, the internet, book history; in poetry: performance, audio/radio, and electronic work. Collaboration was liberation, and a ball. Still never sure where the next text's coming from.

This recording was made on 15 March 2006, at a house in Stamford Hill, north London.

A couple of the poems read here should appear in Angel Exhaust magazine, no. 19.

Hearing about this, long-since-finished
returns enforced separation
resigned, but not to leave the country
flushed upstream, or peeled off
and put somewhere threatened
a former departure lounge
overwhelming memory
we don't want any of
sliding by

Scenes of jubilation, strangers embracing
in the midst of our rubble, the British
divorce rate mutually recognised
leaders do cut-and-run, blaming
difficulties they have to negotiate
dreams of bringing them back
a two-state solution
we have to learn
to love

This industry is global, representing
people in language similar
to my own
re-evaluates one's sense of belonging
on the edge of the market
a battered pram
smoking in a doorway
totally transformed one's belongings

In the end it was poetic, a long walk away
staring at something very distant
meaning would take a few days
to sink in personal decision
withdrawn under dark-grey
sky in container vessel girl
translates new shoes
she voted for, like
calm traffic

Gun Detox (from Words of the Weak)

'Gendered, precise equilibrium, well, no, the shock of recognition in James' work is a language aftershock, you're busy delighting in the word stream and then get hit. Not a truck. Not a fist or a knife. More a sonic birth of recognition -- an alteration in one's sensibility at the perception of the event surge, of time and time's countenance, of Badiou's immanence for itself. James' work is the total product of her unusually striking sensibility ... .' Chris Hamilton Emery