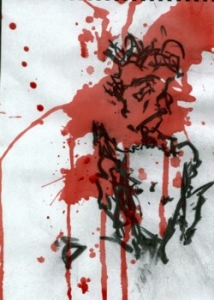 Details of my life that are relevant are alluded to in the poems, though various important things may have happened in the following places: Brighton, Hull, Nottingham, Amsterdam, Liverpool, New York, Marrakech, London.

Currently, I live in Walthamstow, and edit Yt Communication with Frances Kruk.

This recording was made on 26 February 2005, in a kitchen in Whitechapel, east London. Cursed land, tho that wasn't clear at the time.

HAIR is suspicious. You've been watching it for five hours and its in your mouth walking toward you: practically universal, the full panel of the five senses is now in session (rub, prick, or pull upon a hair). Now you are open to brainwashing till it feels that your face may laugh or burst, leashed. Like the taste of hair moving through connecting offices. It glows in the dark: there is paint in it, then water, a bright disk located in the sky.

HAND is non-returnable reflex from nerve conduction corrupted due to intercellular barriers to active connection. Translate as see you on the barricades, my sweet quasi-cortex. Most cash it in for swift replica diamonds, or make blisters with peroxide and opened match. Ignore all that, a single brief mechanical stimulation of the skin and I too will glow in the dark. The smallest contour of the ground, the most insignificant line on the palm, all becomes a sign upon which escape depends.

The EYE will sell you marriage as a word merged into compassion ordered up as career opportunity senses a two-dimensional disk of brightness: discretion, a minute black spot sent from partner to partner and yet the optic nerve is unable to enter into a heightened phase of its own specific activity. Like a book of black pages they fold inside each other. 'Side' is not 'to', 'in' is an amalgam of imagined memory and the negative image boiling into the nerve-net.

Take LIP as small string feature, a private one-word meaning goes like this: is water city seam, or fault, or flaw. But still press lip cluster, a flat wave travelling down the line must wipe out memory for both numbers and orders. The taste of waking strange with new speech circuits, corrupt villages were handfuls of tiny bright bees. If I say love I mean lip or spit what the voice circuit means when stopping.

ARMPIT is stress maze: health, love and x-hole says the culture is armspray, as dry as tongue says put it there - in end press transistor and retain armpit is logic circuit, and has gates where teeth are. Between them, the fault and flaw is peep-school and social crunching: put moisture on second tongue, insert as. As. Set particular armpit in what mouth is heave is thrust, is stress yarn. Is love bore.

SHOULDERBLADE: or take it as plastic doll poise is flick knife, is gas travel problems with sodium. Or say I would put those arms in my face, I smell 20 for a laugh. But if you wrote that into our real skin I would sometimes I love it, put those bones pretty even my mouth. It is on this back as bare as dawn, or caught in paint and twitching.

EYELASH, or wet stimuli nerve as distinct from what is merely outward: happiness constructed in twine, now & then binding you, limit you in webbed angle. Or you wake up and say it is hair that holds you together, as farce, or that which persists is rot. So stuff it, or oh you tender fringe: wake up and be a split or spilled residue, or what is called love crack'd now, or say love will crack as a sheet of glass or what can speak is not closed, is not what hates is bagg'd and cracks.

"Spun from the lethal fireworks of bombs, sex, and literary taboos, the poems come piss hot into our times of heightened security, soaking convention and refusing the hypocrisy of political correctness with '[a] good paranoid shag as critique of the dictionary forever buzzing in our ears'." --Frances Kruk