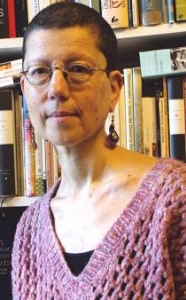 Born in Harpenden, Hertfordshire (UK), in 1958, the great-granddaughter of Jewish refugees from Europe at the beginning of the 20th century, Blonstein earned a BA in Natural Sciences (Genetics) from Cambridge (1979) and a PhD for work on dwarfing genes in barley. In 1983 she moved to Basel, Switzerland, to undertake post-doctoral research on plant hormone genes, but in 1991 gave up employment as a scientist. After four years as a copy editor for a medical publisher, in 1996 she went freelance as a writer, translator and editor.

Her first poems were published in British and North American journals in the late 1980s. After one chapbook in 2002, her first full-length collection, the blue pearl, appeared from Salt in 2003. In 2001, she began appropriating the Hebrew hermeneutic procedures of notarikon and gematria for the creation of several book-length sequences. The intensely polylingual city of Basel -- which borders both France and Germany and has a large migrant population -- had a profound influence on her approaches to language.

The visual arts were also important for her poetry; also influential was contemporary classical music, especially post-1945 music by composers such as Nono, Boulez, Lachenmann, Holliger, Birtwistle and Ferneyhough. She collaborated on several projects with Swiss women composers, especially Mela Meierhans, who has set two texts written specifically for her, as well as pieces from the blue pearl.

from a grey rose

from the blue pearl

from the butterflies and the burnings

'These poems also seem to shimmer on a border. The poems are liminal and have the brightness and evanescence of dreamed material intermingled with something nominally more solid — daily life. The works notate various parts of daily life — work life, literary life, relational life. The texts seem to want to make a third space, a third way, a third "stanza" or room in which materials kept apart (job/personal life; dream waking; fantasy/reality) are fused together. This might be the reason for the invention of a multiple-volta "sonnet"; in all these works, Blonstein communicates a sense of "between" — an evanescent, mobile space in time, fixed only temporarily by holding these works on the page.' --Rachel Blau DuPlessis, In the Wunderkammer, Word for/Word 16 (2010)

'The project is heir to Benjamin's "Theses on the History of Philosophy," capturing the courage and intelligence of history's forgotten ones, rendering them anew, under the aegis of a Jewish woman's language experiments. This is a fascinating and, for many of us, compelling development in contemporary poetry and deserves far richer exegetical attention than a book review can provide: this work deserves its own notarikon process to justly embed it anew in an analytic chrysalis of syllables and contexts, such as the one in which it has embedded at least this reader.' --Maria Damon, Cathedral / palimpsest, Jacket 28, 2009