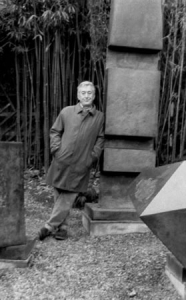 Ralph Hawkins has been writing poetry since the late 1970s when he was one of a number of radical poets gathered at the University of Essex. He now lives on the Essex coast at Brightlingsea. Of many publications the more substantial are Tell Me No More and Tell Me (Grosseteste 1981), At Last Away (Galloping Dog Press 1988), The Coiling Dragon... (Equipage), and his 2004 Shearsman collection The Moon, the Chief Hairdresser.

This recording was made on 17 March 2006, at a house in Stamford Hill, north London.

The Sylph in Stockings

Don't get half arsed strolling at night

They have no shame naked as daylight

'The poems are loose-jointed, limber, the poem as orbit of words around a body that is always dropping away. Sometimes the poems threaten dissolution or brilliance then disappoint either expectation. They go slack. I suspect this is partly the point. The poems are cannier than that. There is one that declares itself "First Anti Poem" and another which is "The Next Poem" and begins:

Ralph Hawkins is the writer of non-collapsible ironies. Or, of canny wobbles.' --Edmund Hardy, Terrible Work.