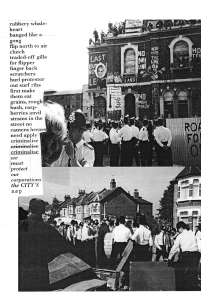 paul hawkins is a bristol-based poet, text artist & word-processor. he studied the art of sleeping standing up and drinking lying down with nearly disastrous consequences. he collaborates regularly, most recently with bruno neiva, (Servant Drone/The Secret of Good Posture), Steve Ryan (diisonance) and live with Rowan Evans. at the last count paul has moved on average every 11 months, but only ever owned one tent.

'Commited social rebels sharing their lives with down and outs, the homeless, druggies and drinkers, in a loose-knit, tentative community. Dub rhythms (or what Hawkins calls ‘loose-boned blues’) and personal memories drive this collection along. It’s original and moving and I look forward to seeing where Paul Hawkins’ poetry squats next.' - Rupert Loydell

'The thirty or so poems in this pamphlet are vignettes of urban life in the 1990s, of grit, pain, love and death, and of resistance and protest. The realism serves up a vivid picture of life on the edge.' - Alan Baker

'Paul Hawkins has picked up Tom Raworth’s energised quirky verbal speed: his rich, fractured, spatialised language drives in and on. I like it.' - Jeremy Reed

'Oulipian divination meets Metro cut-up. The Crash crash-edited into resistance rhythms, cash-in-hand concrete typography, mapping the run-off and the rackets from Claremont Road to Cameron, then cleaned out with half a brick. What looked like a wall, turns out to be a wall of sound; or a barricade. Tip #366: Hawkins is unstoppable.' - Tony White

'If sound is one of the ways in which the world seeps into these poems, then food is the commodity that most repeatedly enters the body, and the poems in Contumacy want to explore the body under capitalism. If these notes have said more about the world than the poems themselves, this speaks to what I like most about Hawkins’ work: the poems consistently point away from themselves and take you back to the world; they let you listen in, then they make you listen out, then they tell you listen up.' - Steve Willey

‘What is the worst poetry myth? That it is a singular form, not naturally lending itself to collaboration? Or that what is actually contemporary, relevant, dynamic, is innately experimental or strange? Servant Drone is one of the finest examples of a poetic work which destroys both superstitions in one fell sweep. It is energetic, decisive, colloquial and necessary. It is a work of synthesis between two exceptional vanguard poets that balances satire, critique and humour with an intense methodological engagement. Brilliant collaborative poetry collection (of which there are far too few) taking on a necessary issue in necessarily disjunctive ways.’ - SJ Fowler

‘Reading Servant Drone is like rifling through Tristan Tzara’s confidential waste, receiving a spam email from Kurt Schwitters or eavesdropping on an inaudible conversation at the fringes of a deconstructivist house party. Fragmentary and beautifully bewildering, this is a work of dense collage, where found and made text stack up to build an edifice that threatens to topple time and again but is saved by a change in wind direction. Servant Drone is in perpetual motion, a shaken snow globe of references and registers, refusing the easy eternal verities, finding instead a more complex truth in the temporary furniture of the sublunar sphere. Deeply nuanced and obliquely radical, this is a book to keep in your pocket as a charm against the liquid spectres of a late capitalist Monday morning.’ - Tom Jenks

‘Fire sermons and authentic retrievals for a battleground on the edge of the liminal, delivered with spirit and spite and sting. True witness.’ - Iain Sinclair

‘Place Waste Dissent is a valuable, experimental, unique contribution to contemporary British poetry. It serves to illustrate that every life and experience is valuable, and to impel us to resist anything that encroaches.’ - George Jackson / Ambit Magazine