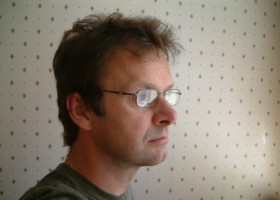 I live in Wales, where I've been most of my life. I studied as an undergraduate and postgraduate at the University of Essex and, after working at a variety of different jobs, teach literature and creative writing in the School of English at the University of Wales in Bangor. My poetry has been published in magazines, pamphlets, booklets and full-length collections since the early 1980s.

The reading on this website was recorded and edited by Alan Holmes in his studio at Hill Street, Menai Bridge. My thanks to him

Work has also been published in a variety of magazines and journals including: Fire, Shearsman, Oasis, Jacket, Poetry Wales, Ecopoetics, Chicago Review, The Gig, The Paper, Masthead and others. My thanks to all the editors.

I have read my work at Subvoicive, Verbals, Soundeye, Schiporst Avant Garde Festival, CCCP, Bay Lit Festival and others.

Ideas of Space in Contemporary Poetry is forthcoming from Palgrave MacMillan in May 2007.

There is no second chance only the
rearrangement of the senses the
pull of the heart sings discordant
across the generations of the things that
move us most; bone, muscle, blood
the desire for the perception
of beauty the desire for the
attainment of beauty

In his article on Human Remains and Sudden Movements and At a Stretch in the literary journal Welsh Writing in English, Matthew Jarvis said: 'In the terms set up by Ian Davidson, ecocritics fail to accept their full responsibilities as environmental literary critics unless they pursue an understanding of space and place which takes due account of their 'human remains' and politicised 'sudden movements' ...'

In Chicago Review the critic Eric Elshtain said: 'Deceptively simple, Davidson's poetry is some of the best political poetry this reader has encountered in a very long time.'

Peter Finch, reviewing At a Stretch for the journal Planet says: 'The music is one of dissonance and the feel one of continuous present..... Davidson is a poet of conviction with rare touches of humour, mainly puns, and an agenda of onward shift, connecting the local with the global and "terminal with terminal".'

And Matt Jarvis again in the journal English said of Human Remains and Sudden Movements:'The result is a spectacular mosaic which, whilst clearly demanding close and sustained readerly attention, becomes an exhilarating journey through a variety of half-seen vistas which build upon one another with distinct power as the collection progresses.'

Nate Dorward in the Canadian magazine The Gig says: 'I picked up Ian Davidson's Human to Begin With (Poetical Histories, 1991) from Peter Riley (Books) years ago and was fascinated by its picaresque seriocomedy, pitched somewhere between James Kelman and Tom Raworth... some of [his work] could be called "nature poetry," I suppose -- but a nature poetry completely wired, plugged-in and mediated, verging on the territory of John Wilkinson's contemporaneous Welsh sequence Sarn Helen.'