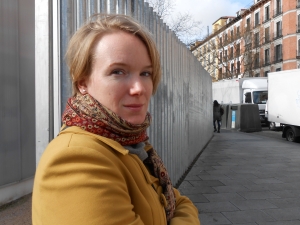 Hannah Silva is a poet, playwright and theatre maker whose work is characterised by its playful interrogation of language, voice and form. She has performed at the Tokyo Design Centre, Krikri International Festival of Polyphony in Belgium, Poetry Hearings in Berlin and throughout the UK at festivals including Latitude, the London Word Festival and StAnza. She is an associate artist with Penned in the Margins who released her debut poetry collection 'Forms of Protest' in 2013.

This recording was made by Alex McDonald.  Hannah performed live at the Archive of the Now Silent Poetry Disco at the RichMix cultural centre, Shoreditch, London, following an open mike by undergraduate student poets.

'She uses techniques like cut-up and collage, sound poetry and physical theatre to create something that's unique but nods to older forms like shamanism, pre-religious ceremonies, Dadaism, and the kind of games that children play with language'. Ian McMillan, The Verb, Radio 3