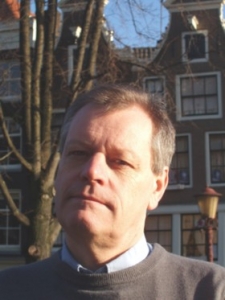 Born in 1955, Robert Sheppard was educated at the University of East Anglia. Apart from the publications listed below he was editor of three magazines, 1983, which, despite its name, existed in the 1970s as a cassette tape magazine of recorded poetry; Rock Drill; and Pages, the latter of which still exits as a blogzine. He has read his work at dozens of venues and has worked in collaborative performance with dancers and musicians. He was an active part of the alternative poetry scene in London during the 1980s and 1990s, before moving to Liverpool, to take up a post teaching English and Creative Writing at Edge Hill University, where he is currently Professor of Poetry and Poetics. Between 1989 and 2000 he wrote a long work (or 'net/(k)not/- work(s)' as he called it) entitled Twentieth Century Blues, which is to be published in a 'complete' edition during 2007. (Its poetics is described in 'Poetic Sequencing and the New' available at Jacket.) Hymns to the God in which My Typewriter Believes, published in 2006, features 'texts and commentaries', works which specifically feed off other works of art. His current large-scale project is entitled September 12, but he has also written site-specific works and some fiction. He is also a critic of contemporary poetry, and a theorist of poetics as a speculative discourse. At other times he's done a bit of blues shouting.

This recording was made on 30 November 2006, at a house in Stamford Hill, north London.

'Internal Exile 1' and '3' may be found in Complete Twentieth Century Blues, but 1 is anthologised in Anthology of Twentieth-Century British and Irish Poetry, and 3 in Floating Capital: New Poets from London. They date from 1987, and are the first and last parts of a sequence.

'History or Sleep' presents the opening sections of the poem of that title, which may be found in Complete Twentieth Century Blues and in The Lores. It was written between August-November 1995.

'Small Voice' may be found in Complete Twentieth Century Blues, and in Tin Pan Arcadia. It dates from January 1997.

The remaining selections are not from Complete Twentieth Century Blues: 'Only the Eyes are Left', a poem in homage to Mina Loy, and 'National Security, Huyton 1940', and are both from Hymns to the God in Which My Typewriter Believes, and written in the early 2000s. 'September 12' presents the first seven 'sonnets' from the first (of four) series of 24 poems, probably to be collected under that title, written in 2003-4.

Note: Ship of Fools was set up in the mid 1980s by Robert Sheppard and Patricia Farrell for the purpose of publishing their art and text collaborations, though we have used it for other purposes on occasions. See Farrell's 'Material to the Event' in The Artists' Book Yearbook 1996-7 (Magpie Press, 1996) for a description of the collaborative process.

Behind the eating huts of
Tent Village, vitamins

self-propagate while furred
rows of men nest in straw,

or cowled in gossip, whisper
down the fragile line.

their aperture: centuries
of gazing focus

on escapologist smears at the
perimeter fence

Rail-tracks stretch to a watch-
tower dead under storm-clouds

billowed onto a tall sky of
taller stories, yellow with

thorned by telegraph pain, by
tangled sentries of wire-nest props.

He chalks a shiver of dusk
across their blackening list.

Note: 'National Security, Huyton 1940,' makes use of the paintings of Hugo Dachinger -- some of them on newspaper pages -- made while he was interned as an alien in Huyton, Liverpool, reproduced in Jessica Feather's Art Behind Barbed Wire (National Museums, Liverpool, Liverpool, 2004).

"The Borgesian complexity of this kind of thing seems designed to posit labyrinthine mega-structures whose complexity can never be grasped or completed. What such devices above all express is ambition and undauntedness, much disliked and perhaps too easily ridiculed by the kind of poet happy to turn in short lyrics which give impressions of (for example) a misty morning on Wimbledon Common." --Peter Barry on Sheppard's Twentieth Century Blues project in his The Poetry Wars (Salt: Cambridge, 2006, pp. 139-40)

Read online, Scott Thurston's review of Tin Pan Arcadia and Hymns to the God in which My Typewriter Believes at Stride.

Finally, Edmund Hardy's interview with Robert Sheppard may be found on Intercapillary Space.