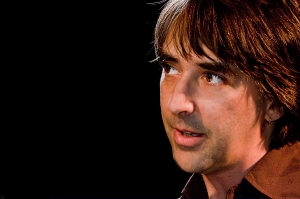 Jason Camlot is the author of four collections of poetry: The Debaucher (2008, Insomniac Press); Attention All Typewriters (2005, DC Books); The Animal Library (2001, DC Books), and most recently, What the World Said (2013, Mansfield Press). His critical works include Style and the Nineteenth-Century British Critic (Ashgate, 2008) and the co-edited collection of essays, Language Acts: Anglo-Québec Poetry, 1976 to the Twenty-First Century (Véhicule Press, 2007). His recent research projects have focused on the history of literary sound recordings and the digital presentation of analogue documentary poetry readings (see, for example, spokenweb.ca). He is Associate Professor of English and Associate Dean in the Faculty of Arts and Science at Concordia University in Montreal. In 2013 he was a distinguished visiting fellow at Queen Mary University of London.

This recording was made by Jacqui Johnson at QMUL in Mile End, London on 28 May 2013.