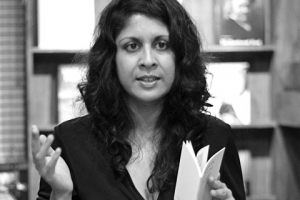 Vahni Capildeo was born in 1973 and came to England from Trinidad as a student in 1991. She was very happy to discover the freedoms and disciplines of Anglo-Saxon poetry at Oxford, which allowed to her to think about metre and rhythm in ways that did not tie down scansion to contemporary standard English. She also found a group of friends, notably including the Scotland-based playwright Sarah Colvin and the mediaeval musicologist Emma Dillon, who made her aware of the issues and possibilities of feminism, women's writing, and the singing/speaking voice.

She completed a Ph.D. in Old Norse, lived in a number of temporary locations including Munich and rural Sussex, and married David Groiser, a poet and expert in German and German-Jewish literature and philosophy (marriage dissolved amicably, 2001). She has worked full-time and as a casual worker for the Oxford English Dictionary, and held a Research fellowship at Girton College, Cambridge (2000-4). She is a Contributing Editor at the Caribbean Review of Books.

Her first book, No Traveller Returns (Salt Publishing, 2003), tells the story of the early part of this transition in a series of poems and prose poems divided into sections like chapters based on time, voice or place. Her second book, Person Animal Figure (Landfill Press, 2005) consists of forty-five dramatic monologues in three voices. Two further collections, The Undraining Sea (2005) and Dark and Unaccustomed Words (2008) are in search of a publisher. Meantime, she works on prose.

Vahni Capildeo's poems have appeared in numerous magazines including Agenda, Caribbean Review of Books, Fire, First Time, Poetry Salzburg Review, Poetry Wales, Pulsar, Rain Dog, Southfields, Tears in the Fence, Terrible Work, The Oxford Magazine, and Weyfarers. She enjoys readings, and has read or given talks in various series and at a number of Higher Education institutions, as well as at the Cambridge Conference of Contemporary Poetry, the Ledbury Poetry Festival, and Marcus Moore and Sara-Jane Arbury's Poetry Slams. She has collaborated on pub performances with the young Norwegian singer/songwriter Sverre Gronlie, as well as doing video and audio work for Brian Catling, and appearing on Resonance Radio (London 104.4 fm).

It is true that I never write for my own voice; and I would not know what it meant to write 'as myself' (who that?). So reading always poses a challenge. Not being trained as an actor, all I can venture to say is that I know where the pauses go... I like to think of the voices on the page as being themselves free, and freely given to their readers. I like the unpredictability of how they may sound with and against other lives and imaginations. The chance to work with others, or give them work for them to do as they like with, rather than as an 'author', has been all too rare, for me. This opportunity to take part in what I view as a collaborative and many-voiced project, more than an index to individuals, is marvellous.

New past   has extra crackle pick up shell kind
where sand   pulls jokes on lovers' legs the safe kind
as hand in hand   they run down dunes the mined kind
just fast   and fortunate enough the aisled kind.

Who traced   my schoolfriend's husband's head, the slashed kind?
Who, paid,   took colour from the fields, the cane kind?
Who'd stayed   a girl in blue and white, the kind kind,
now raced    catastrophe, and not the far kind.

It needs   no patience from us. We're the heard kind.
It sends   round lots of love to all, the meant kind.
Its task   is over then, the ties of blood kind.

So end   with lots of love again the all kind.
Speed   irresponsive through the how-are-things kind.
Go ask   for natural causes where's no mind kind.

GIVE ME MORE TIME, SAID NIGHT

. . . but you're setting me to teach
how suns build up into compendiums:
one,
one,
one to the power of zero?

Given I hold more light,
give me more time, said night;
you will not miss day.
Time enough -- so much must reach
you, summing, bright as ever:
each slowly travelling star
seems,
beaming,
blink-like, desperate.
Look! No day's my comparate.
This needs time: that goes far:
wait, a whole work, like heaven.

And radiant intersections give up sight.

What animal? Does it learn like a child at night, listening to its own screaming?

What animal? Does it wait for a bowl of milk, or stalk off, toothed and self-feeding?

What animal? Can it know itself owned by those animals smaller than itself?

What animal? Can it own those animals when it is smaller than anything else?

I fear I do not have good taste at home good taste was more everybody stopped somewhere but up to a point whether it was gold and pink china custom-tailored jackets children's school certificates nests of tables thickness of mascara days on a European tour or barbaric jewellery from Great-Great-Grandma's first marriage to an East India Company man up to some not easily definable point it was more now these days I cannot tell at all only the people behind the counters in banks and dress shops talk to me as if I were poor but the poor eye me like loose change and I never wore such expensive shoes with polyester socks before the first time I saw a Christmas tree decorated in beige was three years ago is it wrong to like ribbons well perhaps in London naturally.

I would fear the void but I should have outgrown that it is like keeping books about dragons in the bookcase instead of a box under the bed it is like pressing blue flowers in dictionaries of languages you have forgotten but that you read poetry in once thinking of someone who was not with you and who now might be anywhere the void returns to good taste that turns on subtlety subtlety is a form of nothing in a room furnished white on white who dares even put down newspapers little differences say between chenille and linen textures make the wide spectrum eyeball lighted day.

I should be afraid of feeling that we have been here before for example with a person who seems overwhelmingly nice how to explain that affinity the delight with which I see them they are unaware of that though also pleased it is a little bit crazy like the young man in the park alone in a corner flying a crimson kite how he pulled and folded his knees to run and the red thing coursed above him flying the flag of his own blood that he followed like a dancer masterful and helpless between the disciplines of gravity and the stage that is just the ground floor of his excellently ordered air whoever lurks in the shrubbery to watch him sees themselves instead as a child waving to aeroplanes in the days or the pages of childhood when every sign in the sky lifted us without fear fear we kept for indoors.

I have a fear of clouds through a window as a child I thought I played with clouds there was that day a storm was coming so I ran around the house racing the yellow edge of thunder and the clouds boiled thick this was good then at bath-time in the foam I thought of holidays double-decker aeroplanes moving through the cumulus those moments were somehow not true wet grey too permeable then then ah then above the clouds the solid dazzling marble couches for reclining gods that I was in love with yes with all of them Greek ones until the day alone at home ah this is good I thought a grown woman with a day off to look out the window and there they were the scientific clouds freezing freezing crystallizations sparkle evaporated solidity no more how cold the winds and how treacherous my eyes that made them shapely I never could survive clouds not being among them now the look of the sky turns me cold in between my fat and my skin oh so I shiver in layers of human fear hide the window.

I shall not call it fear what happened then to colour it was in a country in the north the apartment was honey with pine the sky a series of vanishing acts we don't look at those too long and high on the sides of buildings iron flowers trivets for citizens to stand on and steam taking the air well colour it was the cover of a book a green book I thought only the light fell over it the reinforced paper was a mutinous mask not-purple not-brown it presented not-colour to the point of saturation like an ill cocktail I turned away from the sight into my memories did I ever pass a field of tilled earth maybe from a train I'd seen something like that not-brown not-purple relieving issued green and what happened it did then memory ran out suddenly light ran like liquid and I was betrayed by everything I'd put a hand on put a name to for I could no longer say the green book the green was not was not-green was not not-green the green book was red and nothing was but as it seems and I screamed to meaning in my head what it means 'the green book' is the book is green under a level kind of ordinary light and that light exists nowhere but in the mind and now not there either.

CHERRIES OUT OF SEASON

It mimics fever. At first it dismays
the children of warm climates.
The cold
draws ropes through the fingers; the cold
calls for thermal pulses, makes
the hand aware of how it is made,
not of what it can do; the cold
has it searching for a sense.
In the cold
a sense of life comes to seem
like a triumph; less is enough.

The breath strikes the inward face.
It shivers against the sculpture of the skull.
It tingles with unfamiliarity upon the rim of the skull.
The flesh seems to have come loose.
Each inbreath brings glass
to scope and spike the linings of the skull.
Outbreaths shatter inside.
The skull
harbours sinuses, folds of softness,
delicate like asters, apt to be blackened.

As we walked
all thoughts were taken from us, except
frost
frost   frost
frost
as we were walking;
and, over and above that,
s   n   o   w.

Kisses are cherries out of season.
The weather wants to be alone.

On Person Animal Figure:
'Among the pleasures here is a frenetic and wickedly ironic interior monologue -- painfully amusing, penetrating and acutely observed.' -- Robert Potts, The Guardian Books of the Year Roundup (17 December, 2005)

On No Traveller Returns:
'This is an important literary debut: the sound of a new, unique, captivating voice. The journey she describes with such ferocity and such an ebullient, unexpected sense of fun is also emotional, and she entices the reader into travelling with her. She triumphantly disproves the pessimism of her title: undiscovered countries are here spread out before us, ready for exploration.' -- Peter Conrad

'No Traveller Returns, Capildeo's first book, is unsettling, uncanny, uneasily wise -- a discontinuous meditation on identity and self-awareness. These are merciless poems -- mercilessly observant, mercilessly precise... But the verbal brilliance of her poems is like armour intricately crafted to protect the vulnerable flesh of the self, fearful of, yet simultaneously eager for, discovery... "What is there that is not known already?" Capildeo asks, then proceeds with wit and ferocity to spin a web of answers... Capildeo records her journey with honesty and nerve and bewitching verve.' -- Nicholas Laughlin, Editor, Caribbean Review of Books

'This extraordinary poetic sequence is a kind of linked fantasia, the unflagging play of a powerful intelligence and consciousness over a series of themes: monsters of self-awareness or personal encounters, interspersed with memories and mental insights of piercing power and sympathy. It is an astonishing debut.' -- Bernard O'Donoghue