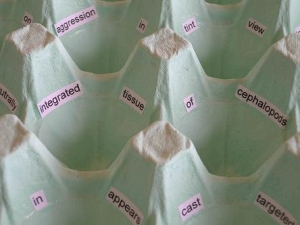 I studied Psychology, Philosophy and Physiology at university, followed by an MA in Creative Writing. Then I moved to Japan for a year, where I worked in a kindergarten and on a chicken farm, amongst other jobs. I currently live in London, working as a tutor and freelance writer. I have self-published two chapbooks, and my poetry has been included in the anthology Generation Txt and various magazines and e-zines. For further details about publications, as well as critical writing, radio and visual work see www.renscombepress.co.uk

This recording was made by Penelope Woods at the British Library on 16 April 2008.

A psychotropic longhouse becomes the locus for this eminent rehash. Its structure is cantilevered thus, so the balcony's long shadow bunches at my throat. The entrance is a revolving door, a kind of promiscuous lock. Inside many young Belgians bodypop their continental ennui. This becomes a poetry of lampposts, dogwalkers, poplars, theodolytes, bus stops, municipal statues and radio masts. All the lonely civil spikes. Here is everything to do with comfort, acoustics, light and shade. I was magnificently bored.