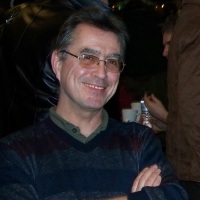 John Seed was born in 1950 and brought up in the North-East of England. He discovered a copy of Basil Bunting's Briggflatts in Ultima Thule bookshop in Newcastle-upon-Tyne one Saturday morning in 1968. It cost 10 shillings and sixpence. From this starting place he bought and read volume after volume of the Objectivists and the Black Mountain poets, one by one. And then Ezra Pound and William Carlos Williams. He sat in the dark corners of many Morden Tower poetry readings and subsequently met Ric Caddel, who first encouraged and published his work. He also corresponded with Charles Reznikoff and met George Oppen on a couple of occasions.

A friend, a postgraduate student at Keele University, said he had a lecturer who talked about some of the same obscure American poets. And during the miner's strike of 1972, in a cold candle-lit pub in Newcastle-under-Lyne (or was it Hanley), he met Andrew Crozier who pointed him to the work of some contemporary poets, especially those associated with Ferry Press and Grosseteste Review. He also found Nick Kimberley's poetry bookshop in Compendium Books in Camden Town - the best poetry library around at that time but expensive to visit.

He lived and worked in Yorkshire from 1972 to 1983 studying and working at the Universities of Hull and Leeds. He also played dominoes and drank many pints of Tetley's bitter with John Riley -- with whom he disagreed radically on almost everything.

In 1983 he moved to London and has taught History at Roehampton University since. Here for several years he was lucky enough to have Allen Fisher as a colleague. He was also lucky enough to find in the mid-80s, moving through the shabby upstairs rooms of various West End London pubs, the Subvoicive readings -- and to be part of a discussion group which met for several years at the Tooting house of Robert Sheppard and Patricia Farrell.

This narrative seems to be organised around a series of lucky chances - but the bookshops, the reading groups, the small publishers and the committed poets were there for me to find, or to find me. So to all of the above - and to Bill Griffiths too - an opportunity to say thanks! John Seed (in the middle) reading with John Riley (on the right) at the Coalpitts Hotel in Durham in December 1977. Ric Caddel is sitting on the left. Photograph by David James.

child in love with
maps the nations
at sunset heartbroken

Last year I helped a man one day
& he did so well on fruit
for he got such a early start
& so cheap he
gave me 3d. extra
to go to the play with

I didn't go I
has no amusements

There is an online interview with John Seed about Pictures from Mayhew on Intercapillary Space.

For some online reviews: