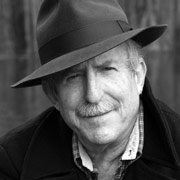 Tom Raworth was born in London in 1938. Having left school at the age of sixteen, he has been publishing poetry since the early 1960s, when he started the magazine Outburst and Matrix Press. With Barry Hall he established Goliard Press in 1965. His first book, The Relation Ship (1966), won the Alice Hunt Bartlett Prize. Raworth briefly attended the University of Essex from 1967–70, and then lived in Ohio, Chicago, Texas, and San Francisco. He returned to England in 1977, where he was poet in residence at King's College, Cambridge.

Raworth's prodigious output (publishing a book or more per year for several decades) can be encountered in his 650-page Collected Poems (Carcanet, 2003). A collection of prose, Earn your Milk, was published in 2009. In 2007 he was awarded the Antonio Delfini prize for lifetime achievement, in Modena, Italy. He regularly performs his work throughout Europe and the US, and has collaborated with a range of musicians and visual artists.

His visual art consists mainly of drawings, collage and found art and has been exhibited in Italy, France, South Africa, and the United States. Some examples can be found at tomraworth.com.

The Archive is very grateful to Cafe Oto for supplying this recording, of a performance at Cafe Oto on 20 March 2012 by Thurston Moore, Tom Raworth, Alex Ward and Steve Noble.

From the Quid CD-R series:

Recorded on 4 March 2006, at Woodland Pattern, Milwaukee, with the saxophonist Steve Nelson-Raney.