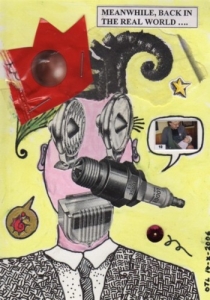 Born "Ben Watson" in 1956, Out To Lunch adopted his punk moniker in the wake of Eric Dolphy (Out To Lunch, Blue Note, 1964), the Mothers of Invention ("Oh No", Weasels Ripped My Flesh, Reprise, 1970) and the Sex Pistols ("Pretty Vacant", Virgin, 1977). Enquiry into the objective coincidence of these three mass-produced artefacts will shed more light on his anti-semiotic verbalese than any amount of gossipacious sleaze or biographical trivia. Having read Finnegans Wake daily since the age of twelve, his brain was tweezed by a glimpse of J.H. Prynne's Brass (Ferry Press, 1971) in the Gonville & Caius College late night bar in 1975. "Cambridge Poetry" promised a zone where anticapitalist liberties might be taken with the English language. After two decades as a music critic, Watson's visibility in print was finally extinguished by the cretinous avatars and parasites of faux avant, so he gave up, and instead devoted his energies to a weekly radio broadcast: "Late Lunch With Out To Lunch" (www.resonancefm.com Wednesdays 2pm UK time), where OTL's critico-poetic impulses can be immediate, unedited by aforementioned cretins (though always improvised to page beforehand rather than to microphone live). To make ends meet, OTL composes the occasional index for books whose post-structuralist tenets frequently make him grind his teeth. He is currently laying down the blueprints for a cultural organ called Gruntwork Or Dogfood with Bush-refugee Michael H. Tencer. He resides in Somers Town, London, with Professor Esther Leslie and their daughter Iris Rosemarine.

On 25 May 2005, Andrea Brady was invited to the Resonance studios on Denmark Street as a guest on "Late Lunch With Out To Lunch". She read two of her own poems, listened to Eugene Chadbourne and heard OTL make his archival deposit of "1. Quantity versus Quality," "2. Arranging Archive Items in the Limit Box" and "3. Unravel Shirts with No Remorse". On air, Brady described OTL's reading as "pretty red in tooth and claw", which chuffed him no end.

Pretty much under the radar, though Andrew Duncan said some perceptive things in Angel Exhaust #12 and Ian Patterson was flattering in Radical Philosophy #124.