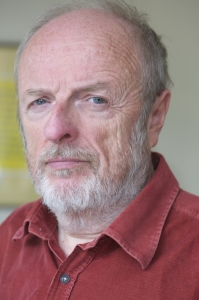 Tom Leonard was born in Glasgow in 1944. He worked as an unemployment clerk and bookshop assistant before two spells at university with a proofreading job in between. His 1984 Intimate Voices including four sequences of Glasgow dialect poems of 1967–79 was banned in some school libraries in Scotland at the same time as it won the Scottish Book of the Year Award. Most of his poetry is in standard English. In the seventies following Bob Cobbing’s encouragement he recorded and performed works for tape recorder, some with narrator/singer and placards.

Some of his political satire was pubished during the miners’ strike in 1984, and while writer in residence at Paisley Library his compilation Radical Renfrew brought back into print sixty mainly working-class poets from the West of Scotland. Then he completed a biography of James Thomson author of “The City of Dreadful Night” on which he had been working on and off for twenty years.

In 2002 he became joint professor of creative writing along with Alasdair Gray and James Kelman at Glasgow University. He retired in 2009, during which year his  selected poems 1965 – 2009 was published. Four years later his selected prose followed.

A translation of Brecht’s  Mother Courage and her Children in which Mother Courage speaks in the language of a West of Scotland working class woman was published in 2013.

This is edited from a public reading at Oran Mor in Glasgow recorded by Camcorder Guerrillas for a DVD that was made in honour of Mordechai Vanunu, who was standing for rector of Glasgow University. The poems in the excerpt from the reading are:

Tom writes: 'The recording was made in Glasgow in the late 1990s by someone then compiling a programme for Danish radio about Scottish poetry. He later sent me a tape of nora's place though I don't know if it was actually broadcast.'