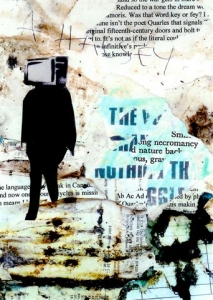 Born in London 1949. Philosophy degree, London 1972. Ran The Poetry Bookshop in Hay-on-Wye 1979-97. Has lived in Sheffield since 1997, working as a specialist bookseller & publishing West House Books. Married Geraldine Monk in 1998.

This recording was made on 20 October 2005, at a house in Stamford Hill, north London

A LOOKING-GLASS FOR LOGOCLASTS: LIFE STUDIES

Cumber of immediate impressions left to steep for the 100th time.
I view myself from the outside observing his lowered and gathered a habit.
A jabbered of everything the spider knows to the dead letter office.
B sat qualmish in the porphyry chair with a halo of ghosts to write or drub.
C had enough woods of withered pines more exquisite than anything by Horace.
Nephritic pains and blue-devil verses were his household gods.
Dearest D who knew the want of a want spelt a thousand words wrong.
Not many more Sundays shut an absinthe mistake in his golden cage.
E so fond of his friends doomed to a suburb in the Pindaric style.
My dear Cozwoz dearest Princess my dear Mary so attached to Ovid.
Dear Rock of Names where the thunder sleeps.
When F and G arrive at the summum bonum they'll be boys again.
H had such a fancy as retreat disembrangled.
J's was the barber's talent who talked as he wrote like a perfect gallows.
His jobation unhinged K and L.
My late dead dear sparrow you may expect it to snow stars.
M made a bread-and-cheesish profit from garlic comedies.
What was Hecuba to him but a mess of the poets?
You're not in Arcadia, N told him, when you're in the Post Office reading my letters.
O saw Elyzium transplanted in a pocket glass shaken to atoms.
If ever he was mumped he was doubly nettled.
The world dead around him but himself circumspangled.
P's volcanic dialect was easily confused with Babylonish jargon.
When the frolic had gone off Q could never forgive England.
First it's bogberry and apricots then purging and subliming.
Dear Machiavel.
R told S what T would do tomorrow.
U was Molly Mog's puppet at his time of transmigration.
V went to Italy with money and left W farewelling.
As if the setting sun could be caught unannoyed my dear heart.
The ruinated renovated.
Three words and a half smile sometimes recall the most pastoral of authors.
At the cataclysm X will be sunk in Spinoza in a cabman's shelter.
Where there's a parcel of singers there's a cargo of songs.
Y didn't seem luciferous to Z but meteorous.

'His writings unite formal experiment, linguistic precision, and concern for a vital relation between people and place. A master of collage and an inspired improviser, he has worked the patterning of strictly visual material back into the verbal medium.'--Gavin Selerie, Pages

'Time and again, Halsey acts on objectified language by jerking it out of an old, established order to reveal its "other", hidden facets and strands.'--Tim Woods, fragmente

'This is a poetry sensitive to decline and the thin veneer of prosperity both fierce and quiet, determined, and without illusion, the kind of poetry we need.'--Simon Smith, Angel Exhaust

'His grasp of language, or the many layers and interiorities that make a text work, is about second to none.'--Paul Green, Chicago Review

The Text of Shelley's Death: 'A cross-genre masterpiece, a collage examining the desire to fix a text as certain, brilliantly doubled as the desire to locate the poet's body behind the poem. Moving in the way it acknowledges the futility of this desire without dismissing such nostalgia for origins.'--Martin Corless-Smith, The Gig

'Wittgenstein's Devil showcases work that exhilaratingly explores language and ideology, running different jargons and discourses together, playfully using near- and half-rhyme to explore difference and identity, in a poetry of passionate and stoical resistance.'--Robert Potts, The Guardian

'Wittgenstein's Devil is essential reading for anyone interested in what has been happening in British poetry in the last thirty years.'--David Kennedy, PN Review

'Days of '49 is a beautiful and moving volume so brilliant that it points to a whole possible new road.'--Andrew Duncan, Terrible Work

Your Thinking Tracts or Nations: 'These unhinged, doodle-like pictures enact some rarely seen cosmic catastrophe somewhere in deepest space where things are either beginning or ending.'--Ralph Hawkins, The North

'It seems to me Mr Halsey's poetry (like all logoclastic poetry) foregrounds the communicative value of discourse.'--Gregory Vincent St Thomasino, Eratio

'Pure intelligence of various means of departure, refined and sharpened up, exactly located, appropriately geared, and cutting right into ore as we dream. Here is a normally secret and invisible antiquarian language spy, print-mining insect, lizard watcher and dovetailed pistachio piss taker, book dealer and forger, editor and printer's devil, emblem inventor, chiastic satirist, light-fingered anti-lyricist, lingering among the keywords and search engines. It is maybe the last real sense we'll get about how we got to the late last days of New Labour and it is our poetry, in English, not at all what is usually packaged and put out around here.'--Tony Lopez, Stride

'Marginalien is a truly exhilarating volume, delphic and intractable in places, in other parts limpid and lyrical. In the end, one is brought back to Halsey’s enormous respect for words and their antonyms, echoes, ghost histories, spectral futures. He continues to create a kabbalah of cultural signs, a dictionary of linguistic possibilities, a stylish verbal music, in his essential role as courteous gadfly.'--Paul Merchant, Chicago Review