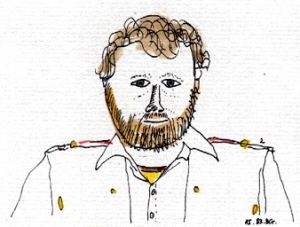 An obituary by David Caddy, a recording of which is presented as So Here We Are 7: Poetic Letters From England, is available from David Caddy's blog.

"I only claim for my poems that they are strange. The Buddhist recovering of ways, the multiple regimes of prison, the significance of coal, the Toxteth riots, the invisible population that shares our world and mimics us... There is a signal lack of respect." BG

Two extracts from 'A Tour of the Fairground':

It woz (I can recall)
Flatbed pennies
Acting aza a sorta travelator.
You added coins this end,
Eventually
Other like coins toppled off the far end
A copper rainfall
In minimal ratio
To your profit loss.
Them you kept.
But more are born than die,
More geese than swans.

Violent churnings
That subside in REGRET

'Bill Griffiths' passionate intelligence, lexical virtuosity, and rhythmic command of language is second to none in the British Isles. In his poetry lost histories become vital clues to understanding our present condition.' --Clive Bush

'Bill Griffiths's mix of street-wise academia and boundary dancing poetry have engaged audiences now for at least four decades. He possesses that ability to mix chance with intent, history with fiction and irreverent music with non-received pronunciation in order to deliver what has become one of the most consistently creative bodies of poetic writing made during the past century.' --Peter Finch

'Bill Griffiths is one of the most distinguished poets to come to the fore in British poetry in the 1970s. He is at once erudite and accomplished, drawing from Old English as often as modern and contemporary parlance. From his ground-breaking sequence Cycles to his translations of The Battle of Maldon to his more recent Durham, his work engages with gravitas, humour and song – often in the same poem. Reading and rereading his work continues to be both invigorating and sustaining.' --Allen Fisher

'This is the world according to Bill Griffiths and Griffiths was gloriously out of kilter with the world. It was his very off-centeredness which gave his writing its intense and highly individual insights. A childlike delight in the ordinary is interspersed with the erudite and esoteric, anarchic fervour is coupled with rage at social injustice and everything is tempered by crunchy biscuits. It punches delicately. It dances hard. A unique voice. An irreplaceable poet.' --Geraldine Monk

'These poems take readers through a swirl of things not yet separable as discrete objects: the eye swims in a world that is not yet ordered. Immersion in this primary magma makes the senses alert and revitalizes language. Words cluster and move apart according to their sounds and shapes, the rhythm of things, and the set of sense at any given moment.' --Will Rowe

'There is a delightful obliquity and playfulness to these poems and to Griffiths' tone as it stretches and develops into a unique lyrical voice, musicianly, everyday and querulous, antagonistic and funny. Collected Earlier Poems is an indispensible and definitive gathering of the finest work of the most winning poet of his generation.' --John Muckle

'Cycles and War W/ Windsor make little direct allusion to modernist precedent yet revel in raw disjunction, simultaneously subtle and naive, a poetry of inscrutable origin rooted in London’s more woeful streets, squats, prisons and biker cafes stationed out in the nomansland of the North Circular where we are surprised to meet Nebuchadnezzar, M.R.James and John Martin’s incendiarist brother while being asked to consider questions of sovereignty and polity rarely addressed in any local discourse.' --Alan Halsey