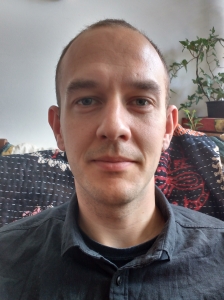 Tom Betteridge is a writer and researcher living in London. He completed a PhD on Alain Badiou’s readings of Paul Celan and Samuel Beckett at the University of Glasgow in 2016. His poems and essays have appeared in Textual Practice, Blackbox Manifold, Datableed, Epizootics!, Guttural, Hix Eros, Intercapillary Space, Jungftak, The Literateur, Scree, Spam, and Zarf. His writing was also included in From London Out: An Antology of Contemporary English Poetry (2017), edited by Luke Roberts. His first poetry collection, Pedicure (2017), is available from sine wave peak press. He co-organised the Peter Manson Symposium at the University of Glasgow in October 2017, and with Ellen Dillon he’s the co-editor of The Journal of British and Irish Innovative Poetry’s forthcoming special issue on Peter Manson’s poetry and translations.

towards you, halted, in spite of ends

an ageless calcite etched from its bloom
sketching in repose, uncumbered trip

clots those venules, myenteric plaits
unweave and fade, and you address this

outward, rooted to a middle-ground
no more than motion defibrillates.

"Pedicure remains a pleasure, read at any speed or hovered over. Filtered through a fairy feller’s garden of delights, music layers merge as language zooms through thought to focus bracketed by timed description. Pages twitch body pollen mist to drift across purls in wine. All this under a Gulley Jimson foot: on record, grateful."– Tom Raworth

'The book as a whole, in its production values, its vocabulary, its prosody and its diction is a work of singular refinement and frequent beauty...' – Robin Purves, in Zarf 7.