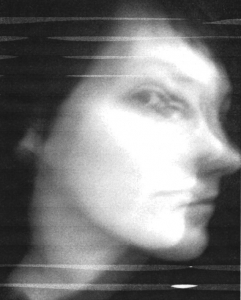 Mendoza is a poet and researcher investigating disembodiment, liminal space and marginal entities through poetic practice. Their work evolves through a series of creative processes: performance, making and unmaking, appropriation and assimilation, exploring the interaction between sound, image and text as a means of de-constructing / (re)constructing the ‘self’.  Poems are written in sets of nine, each component containing nine lines or multiples of nine, frequently with nine syllables per line.  Their work references Northumbrian history, North-Eastern dialect as well as insect folklore and mythology, and explores the idea of containment through self-imposed boundaries, with an emphasis on both the materiality of the text and the creation of (single or multiple) textual identities.

I carried my bird like it was a jewel all twisting in.
my easy descent. my stomach sparsely dusted with
gold