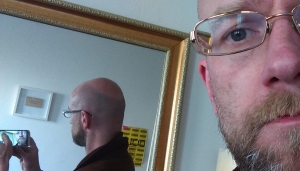 nick-e melville is a Scottish poet based in Edinburgh, primarily grafting in the fields of found, erasure, visual and post ‘conceptual’ poetics, with occasional departure poems. He is currently working towards a practice-based PhD at the University of Glasgow – his thesis, The Imperative Commands, is a 365 page book of days constructed from harvested instructional-institutional discourse.

The poems were recorded by Franciska Ery on January 23rd, 2014 at the Scottish Storytelling Centre

‘The 'me' of the title is taken from the word 'meme' and cleverly suggests how any notion of the self we have inheres within the cultural genes that are passed on to us. melville begins with a close-up of the letters 'm' and 'e' in 'me' and then uses each panel to slowly reduce the size of the letters until all that is left is a black square.’ --Chris McCabe on me.

‘ALERT STATE IS HEIGHTENED marks melville out as a key innovative writer of our time […] Innovation is not simply copying previously innovative practice, but finding different ways of doing things. nick-e melville shows us the way forward.’ Tom Jenks ‘melville excels in showing us what we do not see. Where Betjeman had trains and Larkin had disappointment, Melville has the scotoma: the mental blind spot. If it was possible for a psychological phenomenon to have a poet laureate, then he would undoubtedly be the man for the job. Stuff is not so much a book as a manual for a different way of thinking.’ --Tom Jenks on STUFF.

‘Selections and Dissections: nick-e melville’s collection of concrete poetry, selections and dissections – a banteringly comic and ingenious paging of the visuality of language, its unconsciousnesses, the gaminess citizens of a language ought to enjoy and experience.’ --Adam Piette

‘…the work of poets like Ian Hamilton Finlay and Thomas A Clark, has inclined to the rural and idyllic. melville’s work on the other hand has been urban, with a sense of alienation, a very personal humour, and sceptical class awareness in its take on things […] This is poetry from within an international concrete-typographical tradition to which it pays respect as a means of placing itself precisely in its own distinct take on language. Gide said most good writers have their own specific sense of irony, and that’s one of the things nick-e melville shows in the work here. But by irony is not meant that commonplace smart-arsedness of British literary middleclass detachment and defence; on the contrary this is a way of viewing and engaging that is basic, delicate, and political’ Tom Leonard on Selections and Dissections.

‘[melville] plays with the DNA of language, genetically modifying meaning with the tiniest incision or insertion, and explores the inner space of text with a playful precision, leading us beyond the vanishing point. These poems were made in Scotland, like the bags of cement melville borrows for his three “concrete poems”, but his mix of concrete minimalism is a delicious twist on Scotland’s encounter with the innovations of international concrete poetry. It investigates that first contact and expands upon it by widening the spaceways between eye and mind. Beyond that, it shows a distinct and unique approach to text which anyone interested in language as a visual event has to experience.’ Stephen Nelson on Selections and Dissections