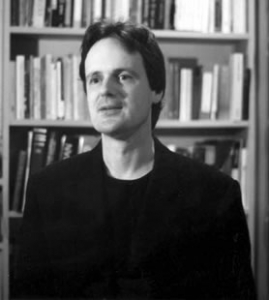 Born Leeds, 1956, grew up in Loughborough. studied Modern Languages and then Anglo-Saxon, Norse, and Celtic at Cambridge University. worked for a telecomms manufacturer for nine years and then for the Stock Exchange, writing software, for three. Left to write poetry full time, which was followed by the traditional poverty. Went back to full-time work and now works for the inspectorate of schools.

Main languages French and German, I also have passing relationships with Russian, Swedish, Welsh, Latin, etc. Maybe I should mention doing a degree in Anglo-Saxon, Norse, and Celtic. This was part of my enthusiasm for David Jones, and was too short to afford in-depth knowledge, but did give me some acquaintance with languages like Old Irish, Middle Welsh, and Old Norse. Learning languages has been a permanent preoccupation over several decades, and feeds the part of my brain which I use for writing poems. I did an evening course in (Scottish) Gaelic in 2000-1 (paid for by my employer, for reasons I can't explain), and have been slowly absorbing more over the last 4 years. I found Irish very hard to learn as an undergraduate, and it's still hard to learn, because the phonology is so unusual, but I am getting somewhere with the Scottish variant. I have just read a whole book in the language (Rioghachd nan Eilean). It was a TV spin-off (ulp). Learning all these languages doesn't mean I am an expert on modern poetry written in them - modern poetry is cryptic and tricky, as we know. In the case of Gaelic and Welsh, the mediaeval poetry is even trickier and more cryptic. I admit to reading modern poetry in German sometimes. Shopping for the books is an abiding problem. I am always impressed by Kevin Nolan's ability to go to a country and pick up what is happening, poetically speaking. I'm sure I always go to the wrong place and buy the wrong books.

This notion of moments when structure becomes visible is important. One wants a poem to be rare but also typical. Comparing cultures gives you that sort of Nolan moment, where a whole social structure swims to the surface; hard to put into human language, and to stage as a scene. Probably I have never written such a poem, but I am thinking about it. David Jones used to quote phrases of Welsh or Latin in a very disciplined way; a single burst of Gaelic speech, say 100 words, holds so much of the sound structure of the language, of the broad/narrow articulatory distinction and so on. Language is small enough for everyone to own it, but one language is amazingly different from another one. Social structure is what everyone has a copy of in their head, it is distributable - and so, perhaps, small enough to expose itself in a poem. I don't think my idea of sociology pours itself into objects in quite the way Jones' does.

This recording was made on 20 August 2005, at Drew Milne's flat in Highbury, north London.

Irritated by the lack of recording of modern British poetry, began a project which includes The Failure of Conservatism in Modern British Poetry (Salt, 2003), Centre and Periphery (in modern British poetry) (Liverpool University Press, 2005), Origins of the Underground (Salt, 2008), and The Council of Heresy (Shearsman, 2009). This project lasted from 1993 to 2009. It covers the period 1960 to 1997. The Long 1950s, a study of the mainstream, came out in 2012. Fulfilling the Silent Rules is next and will complete the set. Overall title is 'Affluence, Welfare, and Fine Words'. Supporting material is at http://angelexhaust.blogspot.com.

On the dressing-table with the nail-paint,
Pfleumer’s rolled gold skin that stayed
On tips of gold-lipped cigarettes
and never left a leaf of Pharaoh’s smile.

Folding the sound, from the foil of scruples,
He sprayed a metal paste on plastic strip
And sold it to BASF for a
Minstrel cotton, a textile vortex.
From jeweller’s wire
to suffusions of aniline dye
How small were the ripples
that laid the sand; how big were the
Blusters of musical smoke, from Ludwigshafen
And downstream.

By lost time that paints on loops
Aligned, looking down
From a ridge between two patterns,
Cutting silver away
To chase a picture on silver.
Butting sashes of fine shaved sound
A mask of narcissistic blond wood
With American-classic semiconductors pointing thataway
You put germanium together with Germany
That’s when you’ve got
Purposeful distortions of the recorded groove

Linger o phantom as I retouch our mood
Flattering the
Dissipations of a simulacrum,
A dupe of time regained
A garage like that will never end

The Ampex Memphis pickup and fixit man
Says, Why that music won’t stick to the tape
Because you haven’t lubricated the tape

(from: The Imaginary in Geometry)

'But this letter is really about one thing, namely Andrew Duncan's Skeleton looking at Chinese Pictures, which I have been reading at intervals now for some time. I think that certainly it is a remarkable book and I also recognize that I must inhabit a shamefully restricted part of the literary world for me not to have encountered his poetry before this […] What I admire most in Duncan's work is his willingness (indeed enthusiasm) for not confining things to any sort of ghetto. he likes as much history and mediaevalism as Pound but he also aspires to a contemporary concern for life in our modern mercantile mess. His chief fault, it seems to me, is a sort of verbal vertigo: too many words spin round and round, and though he has a good sense of rhythm it's difficult to prevent the poems seeming over-stuffed. It's excellent the way he refuses to be cowed by any sort of notion of appropriateness or decorum, so that runic and traditional poetics mix with the city of London and sexual turpitude in modern life. he can be plain enough when he wants to be, as in 'Master of Arts’. To end in so quotidian and disillusioned a way, and slightly before to score the poem much more richly - 'The softness of the buds/ tempts the mouth of ruin' is good writing, I believe. There are many properly 'big' poems - something which doesn't get attempted sufficiently these days, presumably because it gives hostages to fortune. I'm thinking of 'Nomad carpets' 'Rasengang in the forest' 'In the ethnographical museum' and 'Night Train'.

His two styles are happily mixed in 'The Phone ringing in an empty flat' where the common-enough miseries of rejection are fanned into a sort of holograph of Apocalypse. if I say that I am reminded at times of Peter Redgrove, Lawrence Durrell, and even David Jones, with a touch of a more unbuttoned Geoffrey Hill, I am not implying any kind of influence but only the bewildered commentator's need to resort to more familiar writers in order to comprehend someone new. It is certainly a rich book and now that I have marinaded my mind in it, I expect to return to individual poems with greater pleasure and understanding.'

(from a Letter from Peter Porter to Simon Jenner, about 2003)

'Seeing this sequence as a large, articulated work, put into its sections and with the culminations of a sustained amplitude, I esteem its achievement very highly. It Is strong and active with the questions of power which underlie the strength; the instrumentalism of language is put under sustained pressure, both of invention and expression, and the outcome Is negotiated closely across a wide range of historical predicament and moral passion. The method is conspicuously unoriginal, but its uses are strikingly productive and grand.