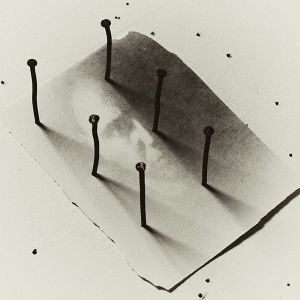 Marc Atkins is an English artist, photographer, videographer and poet. Atkins has lived and worked for many years in London, but has also spend extended periods of time in Rome, Detroit, New York, Warsaw and Paris.

"Through photography, video, film, drawing and text, I have looked to make manifest the characters and elements I see occupying the place, the pause, the precise point of crossover between states of existence. It is usually in the redolence of a room or the multi layering of the city that I find this field of the invisible and the latent forms which become my images. These images can be seen as the lost frames of a film, elements of an endless performance, or the few discovered pages of a missing text, each suggesting a story which continues beyond its borders. This place is a house with many floors, from its countless rooms emerge figures of disturbing and sensual character, each acting out their distinctive cycle, its myriad windows look out onto cities and landscapes that are at once elegant and desolate. These are images located below the surface of immediate visibility, they are images of subjective states."

Come, let us bend a little, let us pry into each other’s minds, the waychildren do, we will play beside one another for a while, and become
allied in a singular world.

From The Prism Walls (Contraband)

‘This fascinating, intoxicating and often hallucinatory book ranks amongst the best prosepoetry collections of the last half-century. Atkins is a Surrealist visionary whose prosecreates a murmuring dream in every sentence, a visual universe in every paragraph. HisLogic of the Stairwell takes you into a world of verbi-voco-visual intrigues that explore themechanisms of perception and memory while blurring accepted boundaries between thenarrative and the lyrical, the sensuous and the philosophical, the essential and theresidual.’ — Michel Delville, author of The American Prose Poem

‘Atkins’ texts are unprecedented. His work gets stronger, more varied in tone, moreversatile in every way. He has gone from a studied neutrality of registration to morepersonal inflections, emphatic, insistent, uncompromising in their eclectic mixing ofregisters, choosing stark combinations of abstract and concrete because the truth can onlybe delivered that way.’ — Rod Mengham

‘Through the playfulness of Atkins’ language and images, we are coaxed beyond thebackwash of experience and our lost paradises. Apparently accessible language requires rereading.Curiosity overwhelms passivity. Against a threateningly heavy backdrop of literaryand personal history, Atkins’ style of uneven rhythms (in syntax and staging), lights ourway.’ — Nikki Santilli

‘I took my time reading the Logic of the Stairwell, it's not a book you should get through inone go. Beautiful and moving, with a lot of variety in tempo. Some passages are so dense,so packed with potential meanings, that they just go by me, but I look forward to returningto them. I think that the greatest pleasure for me as a reader, apart from the imagery assuch, was from the buildup of tension in a paragraph, and then the release taking anunexpected direction and form. A sly alteration, substitution, play on words and idioms,bringing Ashbery's procedures to mind. This is much stronger, to my mind, than thetypically surrealist metaphors and the syntax they entail, and of which you have used quitea few. But these are just technical remarks. The book is wonderful, profound, real in themost intimate, emotional sense, without being obtrusive about this. A difficult pleasure,and all the more pleasurable for that.’ — Tadeusz Pioro, poet, prose writer, columnist,literary historian and translator

'The thick detail of Atkins language lends his writing to prose poetry, often with asides ofshort sentences, to add whimsy and ever more detail to the worlds he creates.' — Review by Sam Murphy, Stride magazine