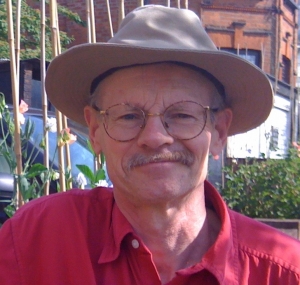 Born London, 1949, of Italian and Anglo-Scottish ancestry. Father’s family involved with the wine trade and restaurants; mother’s with mining and architecture. Studied at Oxford, Sussex and York universities and taught at Birkbeck, University of London for many years. Active participant in the London poetry scene, through which met partner, the poet Frances Presley. Still lives in north-west London, familial territory. Work often involves a layering of voices through history and landscape. See below (Critical Comments and Statement on Poetry).

Magic, mischief, invention—but cut the abstract noun except where it tells. A spell residing in an uttered shape, with any ‘spirit excursion’ subject to enquiry. Lyric with its conditions questioned, vision interrupted, measures found in salvage. Gaps, silences, traces. Interlaced or overlaid situations. The pleasure of turning, twisting language, the agony of getting it right. A self and a force of emotion placed within a framework that is not simply anecdotal or confessional. A serious game, a gamesome gravity.

Much of my work is serial in structure, whether it consists of individually titled poems or numbered segments. Texts serve as independent and as interlocking units. I am attracted to the long span of writing which allows motifs to surface, disappear and reappear in a layered way. The work is often densely allusive but is intended to be read as ‘available surface’ too. Specific cultural and historical references are subsumed within a different order of language—as indicated by Veronica Forrest-Thomson when she cites Wittgenstein’s remark: ‘Do not forget that a poem, even though it is composed in the language of information is not used in the language-game of giving information.’

Azimuth follows the thread of a life over a decade (actually eleven years), with mythological, historical and geographical matter interleaved, the larger elements emerging from daily particulars. It is a young man’s book, naive in places, taking in a vast territory, but frank in approach and freshly realized. Some pieces which reappear in Music’s Duel were revised in the decade following original publication. Elizabethan Overhang and Tilting Square seek a modern equivalent for the Renaissance sonnet, particularly the metaphysical type. Each book operates as a sequence, with a network of cross-references. There is an attempt to redefine the ‘romantic’ relationship and the language attached to it. Roxy is an investigation of style (fashion or orientation in dress and language) and a text in argument with itself. The title figure is a kaleidoscope of female presences filtered through a male consciousness. Days of ’49 recreates the world of 1949, combining documentary with free-flow impressionism and allowing the present to (silently) frame that earlier period. Le Fanu’s Ghost is a cultural, familial and poetic labyrinth, this form being, as Andrew Gibson remarks in another context, ‘a pervasively ironical structure’. All figures, eras and texts seem to be joined but progress to any truth or totality is murky and conditional.

I appreciate Basil Bunting’s insistence on the primacy of sound but at the same time it is clear that ‘matter’ is embedded in even the most playful or abstract work. (Bunting, of course, was well aware of this contradiction.) Azimuth and Roxy could be regarded as markers or commentaries on their respective eras. Yet their pressure of language works against the easily reducible. In poetry, as Geoffrey Grigson remarked, ‘aboutness amounts . . . only to a permeating element’. Strictly, the mode is untranslatable. By comparison prose is ‘not so voluble and slipper upon the tong, being wide and lose, and nothing numerous’ (Puttenham, The Arte of English Poesie, 1589). The constructions of poetry, syntactic, lexical, rhythmic, tend to produce a discourse whose meaning is fluid (‘slippery’) and multi-layered.

I am intrigued by the ways in which writing involves a combination of craft and the non-intentional act. Often some chance event or encounter sends the writing in a different direction and constitutes a richness of interference. Adorno puts this well: ‘What [art] does is to seek to do justice to accident by groping in the dark, which darkness is the trajectory of necessity’ (Aesthetic Theory tr. C. Lenhardt). Technique, inseparable from inspiration, becomes an exploratory mechanism, bearing out an impulse that is half or largely hidden. Adorno speaks of following ‘the divining rod in the direction in which it is being pulled.’ Training makes possible a discovery in the act itself. Seemingly, and allowing for revision, there is not another way for the text to be configured.

Unlike some contemporary experimental poets, I feel that rhetoric can still be a useful resource. Shaping does not necessarily reduce language to bare argument or involve a creaking, mechanical process. Granted, too much mainstream work relies on tired and hollow poetic strategies which imply the existence of some extractable ‘essence’. But rather than being amplification or ornament, a system of deviant linguistic forms can produce a special density of thought and feeling: an embodiment, not just a surface effect. Inversion, the spice of strange terms, repetition, the very arrangement of a text in lines—these are as much ways into as evasions of the real or natural. Even Bunting, who believed that poets should be fed on Darwin’s prose to achieve a grounded mode of notation, said that plainest words must be ‘dodged’ into the right shape. To confine poetic language to ordinary expression, except in specific circumstances, is a misunderstanding of what Wordsworth, Whitman and William Carlos Williams stood for in drawing on the measure of common speech. A gauge of how language patterns may be re-cast from what is rhythmically familiar is the work of W.S. Graham, whose hard-won lines have a tonal integrity that is part of emotional/philosophical weight. A different but equivalent approach drives the sharp-chiselled lyricism of J.H. Prynne, particularly in The White Stones and Brass, where declaration emerges from—and is, as it were, interrogated by—its physical and temporal conditions.

I like to combine different registers of language and to take on different voices. This reflects my continuing interest in theatre. There is also a strong concrete dimension, even where I am not producing pattern poetry as such. My habits of reading and writing were influenced by works such as the Bible and Sandys’s Ovid, which juxtapose main text with marginal gloss, and illuminated books and manuscripts from the Book of Kells to William Blake and beyond. The visual layout of Olson’s projective verse is not far removed from the chart-type columns of Renaissance grammar books (see, for instance, the pages from Brinsley, Lily and Colet, and Webbe reproduced in Martin Elsky, Authorizing Words). There is an allusion to this in Danse Macabre: ‘clausing’ allows visual ‘placing’, as Joseph Webbe argues in The First Comedy of Pub. Terentius, called Andria. A poetry which goes against the grain of grammar may still use the blocks and channels of prescriptive or descriptive discourse. I subject traditional forms such as the sonnet and the blues song to experiment, playing off expectation against surprise. A borrowed context can define a state: Vitagraph uses the divided line from Anglo-Saxon poetry to create a Gemini image; ‘Mercury Deferment’ from Days of ’49 aims at a computer print-out effect, with words tumbling out.

Most of my texts are accompanied by pictures, as section dividers or counterpoint emblems; these are variably referential rather than literally illustrative. Alan Halsey produced graphics for Azimuth, Le Fanu’s Ghost and, more extensively, for our joint-creation Days of ’49. I did the cover designs for Elizabethan Overhang and Tilting Square, and, in the case of the latter, a sequence of rearrangements of the key image. Such procedures emerge from acqaintance with the Renaissance emblem tradition, Blake’s composite art, and twentieth-century exercises in collage. They also imply a working mode that involves multiple perspective or translation from one state to another. Collaborative writing projects take this conflated-but-diverse operation a stage further: besides Days of ’49, I have participated in the making of Danse Macabre and The Canting Academy. Like musicians, writers who ‘play’ together can push each other’s spirit/technique in new directions.

Like Susan Howe, I habitually approach the present via the past (see her discussion with Edward Foster in Talisman 4, 1990). In London one is exposed simultaneously to various strata of history and my work reflects these conditions. Olson’s phrase ‘archaeologist of morning’ sums up the situation and process, although his procedures are different from mine. For poets coming to young adulthood in the late 1960s or 70s, the modernist verse epic suggested a means of enquiry that resolved itself (provisionally) in a mesh of glimpses. Issues of identity and perception could be charted, or rather emerge, outside the lyric box. Yet, with altered social and political conditions, any journey through place and time involves a revised aesthetic. After the necessary ‘breaking of the pentameter’ and experiments with a more variable prosody, it seemed worth reclaiming elements of form which were now not so omnipresent. Conventional linguistic patterns and devices could be torqued so as to reflect a less governing consciousness; parts of a British and Irish lyric tradition, notably perhaps from the 1940s, might operate within a disjunctive fabric that registered or dramatized the tough but exciting conditions of survival in the late millennial capital.

Poetry is a social as well as a private (‘sullen’) art. My commitments and enthusiasms derive partly from a network of friendships, which have enabled me to develop a sense of what is possible within the field of linguistic innovation. The strong emphasis on performance in the London poetry scene has helped to shape an active behaviour for the word: poetry on the page as a score for the voice. Some of these matters, and kinds of practice, are raised in the poem ‘Proxy Concerns’ (Music’s Duel).

That whole history in a solo,
ribbon falls from a proud knot,
wordless stream
wistful throb
out of fulgurous jolts
the grip-route of discover.

A trayful of drinks in drifting smoke.
What converts to a human face?

Propped at the bar, after-hours
in squelchy limbo
she craves some special julep

takes him home, has to check
her husband’s out,
wants to be whipped over a piano.

You lick a shifting tide, by limb splay
look to jump the wreck, beam-float,
laugh as the loss goes good. Bury all
with a chorus.

Pictures drop from a white mouthpiece
till sassafras winds to Clifton Hill,
twelve foot by ten—a nutshell safe—
and half at least alone.

A ballad is the heart
behind the hard, algebra
of stifled need.

‘Days of ’49 is a beautiful and moving volume [which] deals as much with collective fantasy . . . as with flat grey facts’ (Andrew Duncan, Terrible Work)

‘Le Fanu’s Ghost has sought to layer historical times or, rather, to show the presence of the past within the present . . . Selerie has opened a rich vein of Irish Gothic . . . [and] has done this through a constantly inventive handling of poetic form’ (Robert Hampson, Jacket: jacketmagazine.com/36)

‘Selerie [is] a poet of place, describing urban and rural settings with . . . accuracy and craft; he’s a love poet or poet of relationships, creating tender lyrics . . . and he’s above all a restlessly experimental writer’ (Ian McMillan, Shadowtrain: shadowtrain.com/id338)

‘Selerie’s lyric propensities are infused with wit . . . This is not an easy or showy wit, but the difficult, emotionally charged wit of a George Herbert or later John Donne. The abstractions he uses never trail off deliberately into a haze . . . and there is the constant sense of experience through language rather than of language. . . . Selerie is . . . a careful chronicler of [London’s] hidden histories, its slums and discarded people’ (Keith Jebb, Poetry Salzburg Review)

‘Music’s Duel is a hugely important survey encompassing thirty-six years of Gavin Selerie’s poetry and there is so much to enjoy here, whether from Selerie as social commentator or flâneur, antiquarian or neologist, psychogeographer or archaeologist. This is work that never ceases to challenge, delight and engage’ (Alexandra Towbridge-Matthews, Roundyhouse)