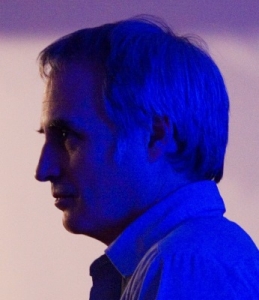 John Cayley has practiced as a poet, translator, publisher, and bookdealer, and all these activities have often intersected with his training in Chinese culture and language. Links to his internationally recognized writing in networked and programmable media are at programmatology.shadoof.net. His last printed book of poems, adaptations and translations was Ink Bamboo (London: Agenda & Belew, 1996). Cayley was the winner of the Electronic Literature Organization's Award for Poetry 2001. He has taught at a number of universities in the United Kingdom, and was an Honorary Research Associate in the Department of English, Royal Holloway College, University of London. In the United States, he has taught or directed research at the University of California San Diego and twice previously at Brown before becoming a long-term Visiting Professor in 2007 and then regular faculty in January 2011.

During a single-machine 'staging' of imposition

a recording from: imposition (2007- )
John Cayley, with Giles Perring

The 11'16" imposition.mp3 was recorded by Wiretap Studio during a single-machine 'staging' of imposition, August, 2007. This recording is based on imposition, the networked performance of an evolving collaborative work engaged with ambient, time-based poetics and harmonically organized, language-driven sound. imposition emerges from translation, and uses the same texts and procedures as this earlier piece. It continues an investigation of iterative, procedural removal from one text or language to another. During a performance of the piece, four passages from the source texts of imposition are presented in any one of three shifting states: surfacing, floating or sinking. A passage will also be in one of three changing language states: German, French or English. If a passage sinks in one language it may, for example, surface in another. imposition then distributes these states over the internet in order to enable a networked transliteral and musical performance. Any number of computers that have downloaded one of twelve distinct QuickTime 'listener' movies will have these movies controlled by the main, 'server' text of the piece. These movies play looping musical samples of human vocalizations which harmonize both with the server and with other linked and listening movies. The music of imposition was designed and composed by Giles Perring. For this iteration of the work, Perring commissioned and produced new vocal performances from Melanie Pappenheim.

During live navigation of riverIsland, August, 2007

a recording from: riverIsland (1999- )
John Cayley

The 15'30" circuits.mp3 was recorded by Wiretap Studio during live navigation of riverIsland, August, 2007. riverIsland is a navigable text movie composed from transliteral morphs with a few interliteral graphic morphs. It is a spatialized aural poetic environment in which the reader may investigate of procedures of textual transformation associated with translation, which are proposed as transliteral. More context and explanatory material is available on the web.

Credits and acknowledgements: riverIsland oncepts, programming, photography, design and text is by John Cayley. The sequence of sixteen poems arranged in the 'horizontal' loop is composed of Cayley's poetic adaptations from 16 of the 20 quatrains by Wang Wei (701-761) in his famous 'Wang River Sequence'. The 16 texts in the vertical loop are all based on poem number five from this sequence ('kong shan bu jian ren ...') which becomes the 'opening' poem of riverIsland. The variations in this loop include material quoted from Nineteen Ways of Looking at Wang Wei: How a Chinese Poem is Translated (compiled by Eliot Weinberger and Otavio Paz, New York: Moyer Bell, 1987), namely Burton Watson, Gary Snyder, Francois Cheng and Octavio Paz's versions of the poem (on pages 24, 42, 36 and 30 respectively). Arthur Cooper's translation of the poem from his collection The Deep Woods' Business (London: Wellsweep, 1990, p. 43), is also quoted. Recorded readings and atmosphere are by John Cayley, except Harriet Evans for the French, Spanish and Chinese. Thanks to Giles Perring for recording and assisting with digital audio manipulation; Douglas Cape for help in understanding QuickTime and QTVR in particular; Xu Bing for his Squareword calligraphy within the embedded interliteral morphing movies (visual only). Authoring and scripting of QuickTime for riverIsland was done in LiveStage Pro versions 2.1 thru 4.6.6 with some behaviors based on PanoSound by Ian Mantripp.