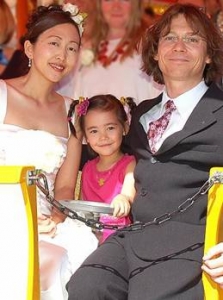 I was born in London in 1962. I lecture on Creative Writing at the University of East London and edit the online journal onedit. My star sign is Leo. My favourite colour is orange.

It's difficult to think about the many different ways of reading and reading a poem and then realise that just one of them goes into the world, repeatedly, here. The ways that I have read Horace recently include: Bertie Wooster-as-a-Fall-fan, Horace, world weary, angry & bitter, resigned-yet-compassionate, doing-the-standing-still, in a floral shirt, with a cravat, to Thomas Evans & Tom Raworth, holding my daughter Koto (for the first part), to complete silence, sweating, thinking of Sir Henry at Rawlinson End, to uproarious laughter, and to myself. That they are rather grave in this recording is due to the fact that the humour needs an audience to arouse the reader, and that the references to several painful incidents ("like Gertrude Stein at Radcliffe" for example) are always painful. They, however, work best with some chilli in the jelly. I enjoy reading the Horace poems more than any others.

"Folklore" reads (in my head) at times with a Worcestershire accent. It is a mix of West Country burr & the Birmingham clip & whine but is only one of many parts that sound themselves though the sequence. Almost none of the voices are my own, although by the end they all are.

This recording was made on 9 September 2006, at a house in Stamford Hill, north London.

One day Hippolytus
Ears crossing the calamities of 25,000 years of topsoil
When darkness falls   upon a  Rolling Stone
There will be no life outside Worcestershire
And that is no life at all

'When a poet enters the act of translatione, transforms that act into outright poetic material, and does so to poems qua translationes that are scale models of difference and sameness, cross-pollination and contamination, candidly marked by misprision and imprecision... when a poet does this, is he or she actying as a poet or as a translatore?' --Kent Johnson, from a review of Horace

'Tim Atkins does for translation what Gertrude Stein did for nouns.'--Lisa Jarnot

'Hazardous and buoyant, with all the zip and sass of a Heathrow-unslough'd O’Hara. Not, decidedly, the programmatic constructivist plodding of routine translation homophonickal, not, apparently, translation exactly at all (though I suspect a rather deftly salacious argument’d carry for 'l bel tempo rimena's being auscultated as "the golden age of homosexuality," like running a forefinger around a goblet to make it sing...)' --John Latta, Isola di Rifiuti blog

Tim Atkins’ translations of fourteenth-century Italian scholar and poet Franciso Petrarcha’s sonnets (in Petrarch) open an entirely different kind of functional space within the gap between media, and inject it with wit, contemporary vulgarity,
and not a little libido. Crater’s edition is a thing of wonder itself, featuring bright orange, blue, purple and green inks, requiring a paper knife, and fronted by an image of Krazy Kat being hit by one of Ignatz Mouse’s bricks. The image
is pitch-perfect for a book full of unrequited, confused, overbearing love, considering both Petrarch’s famous inspiration from afar (Laura), and Atkins’ own hilarious, charming love of Petrarch --Eddie Hopely, The Poetry Project Newsletter