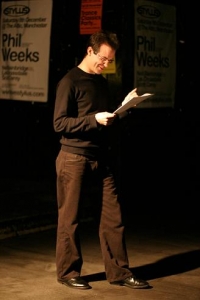 My creative practice as a writer attempts to steer a course between an awareness of the material nature of language whilst acknowledging its capacity to communicate directly or indirectly. I tend to work in an improvisational fashion, often writing short poems which respond to experience and memory in spontaneous ways. These poems build up into sequences which become records of processes of thinking and development over time. I am fascinated by how thought and language move, and the capacity of the poem to track and trace this subtle energy.

I did my PhD in Poetics at Edge Hill 1997-2002. I now run the MA Creative Writing: Innovation and Experiment at the University of Salford and co-run The Other Room reading series in Manchester. I edit The Radiator, a little magazine of poetics, and co-edit The Journal of British and Irish Innovative Poetry with Robert Sheppard. I live in Liverpool.

The photograph, taken by Peter Griffiths, shows me reading in Manchester in 2007. You can hear a recording of this performance below.

This recording was made on 25 November 2006, at a house in Stamford Hill, north London. The reading includes performances of the first three texts in the collection Hold published by Shearsman in 2006.

This recording was made on 14 November 2007, at The Thirsty Scholar pub, Manchester. I began this poem sequence in response to the invitation to contribute to James Davies' Matchbox magazine project, a unique series of 12 issues of individual poets' work published inside real matchboxes. I developed a form comprising four four-line stanzas which were readable in a vertical direction as well as horizontally (see below for some examples). For the Matchbox presentation I used seven of these poems but cut them up into single stanzas which could be read individually, as part of a 28 stanza sequence, or in new patterns. In this performance I read the stanzas of the first seven Matchbox poems horizontally in their original forms and then some newer poems from the sequence, reading the final one in both directions. The completed sequence of 80 poems will be published by Shearsman in Spring 2010.

The photograph above was taken at the moment when a train, which you can hear on the recording, rumbled over the top of the venue at an apt point in the reading!

Ira Lightman, 'On Weightedness in Poetry: An Approach to Scott Thurston' at The Argotist Online.

Joseph Brooker, 'The Needle and the Language Done' at Pores.