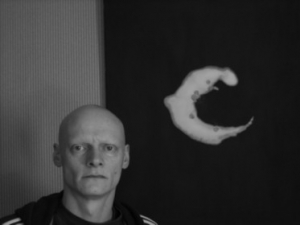 David Rushmer (b. 1965) was editor of pen:umbra magazine (1988-1991). Studied photography and art & psychology at University of East London 1995, and now works as a Library Assistant for the University of Cambridge. His artworks and writing have appeared in a number of small press magazines in the U.K., France and the U.S.A, and his artworks have been exhibited in Cambridge, London and Yokohama.

This recording was made on 7 February 2007 in Bishop's Storford, engineered by David Houssart.

The Family of Ghosts 
writing
a
place
I go

feel you skin
around me

your eyes
the sky to sing
of death

fill the air
with your bones

or
opening your mouth
in the rain

eternity
pours through you

your eyes
the sky to sing
of death

Work quoted and briefly discussed in The Failure of Conservatism in Modern British Poetry by Andrew Duncan (Salt, 2003).

"the only prop allowed is the human body. This purism puts the surviving images under terrific pressure, which they adequately sustain..." Andrew Duncan, 'Living in Division and Shifting Sands', review of Sand Writings and related works appearing in Angel Exhaust #11.