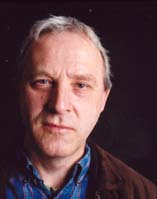 This recording was made on 20 August 2005, at Drew Milne's flat in Highbury, north London. Peter read mainly from two sequences: Are We Not Drawn... (unpublished), and An Encounter Upon the Beach of Minehead With the Prince of This World (published in Textual Possessions, and in most recent issues of Angel Exhaust). The former is an exercise in decentering the voice; the latter in narrative and how not to do it.

sequences from Are We Not Drawn... in: