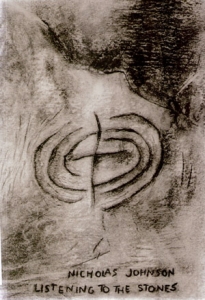 Nicholas Johnson was born and raised in north Devon. He studied Performance Writing and Visual Performance at Dartington College. Bob Cobbing published his early sound texts. His poetry includes the book-length works Haul Song, The Lard Book [filmed by B.Catling and Sarah Simblett] and Show. i, on foot and mouth the first plague of the 21st century, was commissioned by The Arts Council. Land: Poems 1983-1998 displays his shorter poetry. An expanded edition Land Redux: Poems 1982-2007 is in preperation. He was Writer in Residence for the Black Mountain exhibition, Starting at Zero, at the Arnolfini, Bristol in 2005.

This recording was made on 28 January 2007, at a house in Stamford Hill, north London. The selection was loosely chronological, and while it avoided the sound texts, I hope I was able to convey the surface of the longer texts and my interest in neologism and dialect.

little boat
under blue
Mast. Cross
into the
Border
Bower
Those dots that
Hang