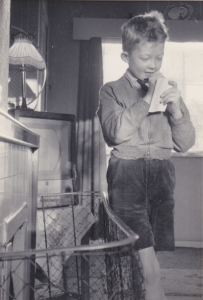 The son of a trainee RAF wireless operator from the East End of London, stationed, temporarily, at Whitley Bay; and a local Geordie lass. They met in 1945, whilst he was on weekend leave with a pal in Newcastle, and she was a volunteer, serving hot drinks to servicemen in uniform, in the City centre. He was due to fly out to the Far East but then the Americans dropped the Atom Bomb on Japan and they were able to marry.

Thus, between them, J Robert Oppenheimer and Harry S Truman, inadvertantly created the circumstances which gave rise to the procreation, and birth on 17th July 1948, of Barry MacSweeney.

Such is the way of these things.

He grew up in the suburb of Denton Burn, a mix of thirties semis and post-war council housing, at the other end of Newcastle.

[Bizarrely, someone has actually written about how dull Denton Burn is. See page 308 of Stuart Maconie’s excellent study of Northern life, Pies and Prejudice.]

Graduating from Broadwood Junior and Infants’ School, Barry attended Rutherford Grammar School for the next five years, in the bit posher suburb of Fenham, intent only upon mastering the English Language and disrupting Physics lessons.

The Newcastle Evening Chronicle took him on as trainee reporter despite, or, perhaps because of, the fact that he’d spent his Maths and History exams writing poetry.

[It’s the old thing about never let the facts get in the way of a good story.]

By the age of sixteen he was addicted to Newcastle United FC.

And then he made a slightly quirky, if extended, newsgathering perambulation around some of the great towns and cities of England.

Along the way, he insisted on writing poetry.

And back again, finally, to Denton Burn.

Perhaps he missed the boredom.

He died in 2000, a Newcastle United season ticket holder. His final collection is due to be published by Bloodaxe in 2016.

Recordings have been provided to the Archive by Barry's brother Paul McSweeney. Deep thanks must go to the following people for their generous assistance with the collection these recordings: David Caddy; Tom Chivers; Allen Fisher; Jackie Litherland; Chris McCabe; Emma McGordon; Jeremy Prynne; Peter Riley; Colin Still and the staff of the Newcastle University School of English.

If anyone is aware of any other audio material made by Barry, or about him, please contact: paul-mcsweeney@hotmail.co.uk.

Desire Lines presents the reader with over 300 pages of Barry MacSweeney in all of his guises. As a poet of experiment and tradition; of personal drama and public scandal; of early fame, journalism, and politics; a poet of the city and the river, the hills and the coast. From his early bestseller The Boy from the Green Cabaret Tells of His Mother (1968) through the ambitious Black Torch (1978), and to the tender unpublished 'Soft Hail' (1988), and his dazzling 'collaboration' with Apollinaire, this new Unselected Poems restores to view the full achievement of MacSweeney's writing life. Combining long out-of-print sequences with previously unprinted archival material, Desire Lines should cement MacSweeney's position as a major British poet of the 20th Century. The book includes an introduction by the editor, Luke Roberts, and extensive notes on the poems.