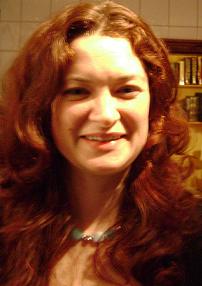 Jennifer Cooke has had poems published in Quid, Onedit, Succour and on Intercapillary Space. She has given readings in Brighton, Leicester, London and Loughborough and was the East Midlands editor for Cleaves, vol. 1. She regularly writes about poetry, which has included articles and reviews on the work of Stuart Carlton, Keston Sutherland, J. H. Prynne, and Alice Notley. She lectures in English Literature at Loughborough University. Her current project is a collaboration with experimental electronic composer Adam Robinson on a 'musical' poem sequence.

The Profundity of Cod

• nurture pre-morbid thoughts, a limerant  outlook •
fasten • behind eyes rouged by popular dis
coursing and bright orange aspartame
empty Werthers scuff their shoes and sulk •
dig in • decorate the trees or eggs • draw  a
round intimacy • O • make ass-o-nance •
responding without self-expression she  said: no •
dog's piss snow holes don't anymore even  when
they are dead these dogs, that Argos •
i'm in profile • in profligacy • in  sickness •
the same banners fly above us both  ungraspable
a male spell, even blind rats route it out  • erhm •
collapsible selves pack neatly away,  stacked • bit
of a dust up • punched up the arse • they  shake
hands afterwards, move back to their  postcodes •
stand up now, fess out • wad towards the  other
• the bigger picture: keeping it in  perspective •

motorola's streamlined force reduces  variant
flipchart eugenics in tedious mission  housing
bores the lunch development meeting into
acquiescence nascently redeemed by prawn
sandwiches and a glass of Vit C juicings
gnaw on need for a bit of classy Greek
a message undeciphered through the stats
marches all the big 6 into future pro
ductivity without libido superannuation
manacled against zero defects type away
define measure anaylse design verify
ourselves which we are enjoined to know
our working worth and our inner monad
pawing at itself in the toilet cubicle (GF)
practice your work under a symbol of
methodology punted in glass concrete
executed with benign beneficence
and subsidized gyms adjust the calliper
to pay less tax unless you opt out
his eyes glaze over describing himself
as intelligent on match.com. dead

• something prophetic about the third term
the last corner of triangles adding up
summarizing all into a sick seguer •
telling me about you through the book
club and the majesty of a dinner party
dreamt by the ego of the one and only I •
Heidegger's on an island with a hammer
and running  screaming the girls recall
their father-figure first times and foetal
discards • access to intimacy of my own
phylogenesis • tell yourself tales that co
• ordinate: 1) there is wound 2) beneath is
trauma 3) under deep that is precisely
nothing • unless but prod into shape of
Richard and Judy's clingfilm interview
• self becomes parody of David Guest's
strung hung face • your implants eat you •
soul and mystery: appreciate your depth