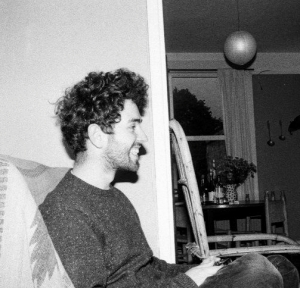 Rowan Evans is a poet, composer and sound artist, the author of freak red (Projective Industries, 2015), cante jondo mixtape (If a Leaf Falls Press, 2017), ODE RHIZOME MOUNTAIN SONG (Moot Press, 2016) and returnsongs (Wide Range, 2012). He received an Eric Gregory Award in 2015 and a selection of his work appears in the forthcoming Penguin Modern Poets 7: God is Distant (Penguin, 2018) with Geoffrey Hill and Toby Martinez de las Rivas. Rowan is co-editor of Moot Press, where he co-curates the Anathema reading series. He is artistic co-director of Fen, an interdisciplinary company based in Bristol creating work for performance, film and installation. Rowan’s current work engages with Anglo-Saxon and other ancient languages and literatures of the British Isles; mulitlingualism, sound poetics and hybridity; landscape and ecopoetics; concrete and visual poetics. Music, sound and performance works integrate field recordings, ambient electronics and contemporary classical composition, exploring the convergence of natural and digital sound environments.

"Tirelessly inventive, this substantial collection of vivid lyrical work is properly conscious of its modernist forebears, yet is not overwhelmed by them; it strikes out with sustained energy and thoughtfulness to establish its distinctive way." – Denise Riley, Eric Gregory Awards, 2015

"Human speaks fox, fox speaks fox, fox unspeaks human? Rowan Evans takes an intensity of encounter with urban place and focuses it through fox-person before projecting it brilliantly on the screen of the page. What we see are tight units of signs, what we hear are bursts and barks of sound, but behind these are vast histories of utterance, of connection with animals venturing close to human settlement, reclaiming human-claimed space. Rebuilding. Being present. The fox isn't fable, it's actual. Fox is fox. And the human observer is translating from both the real and fabulous. There are tomes of work and experience in this 'small' wonder writ large. Almost nothing more needs be said. Exquisite, haunting, necessary." – John Kinsella on Freak Red

"... a Beckettian attitude to expressivity, focusing on the moments in the text that allow for the slippages of tongue to manifest ‘the animal’ beneath ... it is a provocative and highly erudite work that can wrench our considerations to such a degree that we feel the need to consider our own standardizations of speech and their relation to the tongue of an other." – Samuel Stolton, 3:AM Magazine on Freak Red