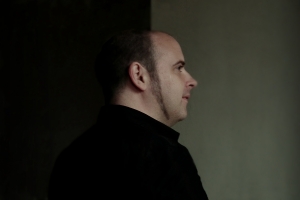 Alistair Noon was born in 1970 and grew up in Aylesbury, Bucks. Besides time spent in Russia and China, he has lived in Berlin since the early nineties, where he works as a translator. He performed at international sound poetry festivals in the mid- to late nineties, and his work has appeared in magazines including Jacket, Poetry Wales, Shearsman and World Literature Today, anthologies including Sea Pie, Lung Jazz and The Best British Poetry 2013, as well as in chapbooks and collections including Earth Records, shortlisted for the 2013 Michael Murphy Memorial Prize, and The Kerosene Singing. His translations of the Russian poet Osip Mandelstam will appear from Shearsman Books in September 2018.

This recording was made at Queen Mary University of London by Jacqui Johnson on 17 May 2012.

From 'By the Bornholmer Bridge', Swamp Area

Each spring, clouds rise at the old coastline,
the vanished cliffs of the Berlin Wall,
where the Asahi Foundation expresses its joy
that the national fissure has closed.

There are clouds across Wuhan Campus, too,
on hills where Spring’s Red Guards once fought.
It costs ten Yuan now to watch these performers,
wowing the audience with their white blooms.

Their season words are ready to rain.
Gift. Cover. Commodity. Species.
Among those meanings, how could the trees
have existed before they got names?

'One fascinating thing about the poems in Alistair Noon’s At the Emptying of Dustbins is the way in which their content almost makes them read like poetry in some eerily good translation: political lyrics are few and far between in contemporary British poetry. There is a perceived distance in British tradition between the personal and the political, and in this pamphlet Noon plants the fertile soil between the two.' -- Nathan Thompson, Horizon Review

'I don't know any poet who flies about so carefreely, never alighting in the pigeonhole for long enough to become ringed. Each poem represents a moment of attention just long enough to signal its intention, and then it moves on.' --Giles Goodland

'This is genuinely terrific writing, of wonderfully gratifying complexity. There's no one else, to my limited knowledge at least, who is taking on these big questions – with so many terms of reference. It's work that draws me back, which is something that real poetry demands.' --Tom Lowenstein on Some Questions on the Cultural Revolution

'There is a poetical category called “the new formalism” but I don’t think Alistair Noon is in it. For all his belief in formal properties he is not writing in opposition or trying to turn any clock back. He does, I think, see a central space in current poetry which is being neglected or drained by extremism on both sides and seeks to regenerate it. He is just as concerned as any avant-gardist to use poetical language to reveal what lies below the surface, but does not see this being done by negating language itself, and thus denying cultural partnership with the reader. He distrusts the levels which the experimenter needs to excavate through, and this means he trusts perception.' -- Peter Riley, Fortnightly Review

'Earth Records isn't perfect. That said, I can't think of a debut collection from the last decade that has excited me so much.' --Ross Cogan, Orbis.