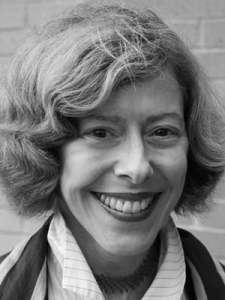 Leslie Scalapino (July 25, 1944 – May 28, 2010) was a United States poet, experimental prose writer, playwright, essayist, and editor, sometimes grouped in with the Language poets, though she felt closely tied to the Beat poets. A longtime resident of California's Bay Area, she earned an M.A. in English from the University of California at Berkeley. One of Scalapino's most critically well-received works is way (North Point Press, 1988), a long poem which won the Poetry Center Award, the Lawrence Lipton Prize, and the American Book Award.

An experimental writer associated with the West Coast Language poets, Leslie Scalapino attended Reed College and received an MA in English from the University of California at Berkeley. Scalapino’s writing often blurs the distinctions between poetry, prose, and even the visual arts—her book Crowd and not evening or light (1992) includes photographs with handwritten notes. Her collections include Considering how exaggerated music is (1982), that they were at the beach-aeolotropic series (1985), and the trilogy The Return of Painting, The Pearl, and Orion (1991).

From that they were at the beach

She heard the sounds of a couple having intercourse and then getting up they went into the shower so that she caught a sight of them naked before hearing the water running. The parts of their bodies which had been covered by clothes were those of leopards. During puberty her own organs and skin were not like this though when she first had intercourse with a man he removed his clothes and his organ and flesh were also a leopard’s. She already felt pleasure in sexual activity and her body not resembling these adults made her come easily which also occurred when she had intercourse with another man a few months later.

When sexual unions occurred between a brother and sister they weren’t savages or primitive. She had that feeling about having intercourse with men whose organs were those of leopards and hers were not. Walking somewhere after one of these episodes she was excited by it though she might not have made this comparison if she’d actually had a brother. At least the woman she had seen in the shower had a leopard’s parts. In these episodes when she’d had intercourse with a man he didn’t remark about her not being like that. And if women had these characteristics which she didn’t it made her come more easily with him.

She overheard another couple together and happened to see them as she had the couple in the shower. The nude part of the woman was like herself and the man had the leopard’s parts so that she had the same reaction and came easily with someone, as she had with a sense of other women having a leopard’s traits and herself isolated. The man with whom she had intercourse did not say anything that showed he had seen a difference in her and that made her react physically. Yet other women seemed to have a leopard’s characteristics except for this one she’d seen.

Again it seemed that a man with whom she had intercourse was her brother and was ardent with her—but this would not have occurred to her had she really had a brother. Yet her feeling about him was also related to her seeing a woman who was pregnant and was the only one to be so. The woman not receiving attention or remarks on the pregnancy excited her; and went together with her sense of herself coming easily and yet not being pregnant until quite awhile after this time.

She also felt that she came easily feeling herself isolated when she was pregnant since she had the sense of other women having leopards’ organs. They had previously had children. She was the only one who was pregnant and again she saw a couple together, the man with leopard’s parts and the woman not having these characteristics.

Again she could come since her body was different from the adult who had some parts that were leopards, and having the sense of the women having had children earlier than her and their not having younger children now.

Her liking the other women to have had children when she was pregnant had to do with having them there and herself isolated—and yet people not saying much about or responding to the pregnancy. She thought of the man coming as when she caught a sight of the couple together—being able to come with someone a different time because she had a sense of a woman she’d seen having had her children earlier. There being a difference of age, even ten years, between a child she’d have and those the other women had had.

She happened to see some men who were undressed, as if they were boys—one of them had the features and organ of a leopard and the others did not. The difference in this case gave her the sense of them being boys, all of them rather than those who didn’t have leopards’ characteristics and this made her come easily with someone.

It was not a feeling of their being a younger age, since the men were her own age, and she found the men who lacked the leopard features to be as attractive as the one who had those features. She had the feeling of them as adults and her the same age as them, yet had the other feeling as well in order for her to come then.

She saw a couple who were entwined together and her feeling about them came from the earlier episode of seeing the men who were nude and having the sense of them being adolescent boys. Really she’d had the sense of the men she’d seen as being adults and herself the same age as them. The couple she watched were also around the same age as herself—the man being aware of someone else’s presence after a time and coming. The woman pleased then though she had not come. She had intercourse with the man who had the features and organ of a leopard and whom she had first seen with the group of men who lacked these characteristics. The other men were attractive as he was. Yet having the sense of the difference between him and the others, she found it pleasant for him to come and for her not to come that time. The same thing occurred on another occasion with him.

She compared the man to plants, to the plants having a nervous aspect and being motionless. The man coming when he had the sense of being delayed in leaving—as if being slowed down had made him come and was exciting, and it was during the afternoon with people walking around. He was late and had to go somewhere, and came, with a feeling of delay and retarding—rather than out of nervousness.