“We Are Primed for Patterned Language”: Listening Together 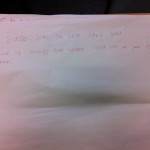 You are in fear of unknown 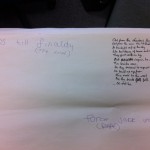 Chaos till finality (the end) 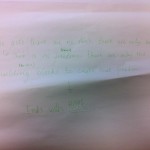 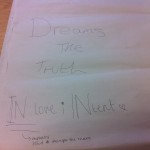 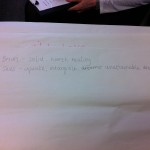 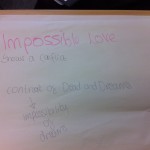 Join the Archive of the Now at Rich Mix on Saturday 10th May, 2014, for a chance to listen together: from 12-3pm, Kiddy Kamarade for budding poets 8 and under (with parents or carers); and from 3-6pm, Silent Poetry Disco, with an open mike, performances by Andra Simons and Hannah Silva (being recorded live for the Archive) and the fabled Silent Poetry Disco… Free. Accessible venue. All welcome.

“By beginning from the particular, the particle, with a clip, a segment, a sample, a micro-sample, a breath, the sound of a turning page, a stutter, a variant in pronunciation, the voice vibrating against the hiss of a room, the shifts between speech and song, we engage in an expanded mode of perceiving… while listening to a recording of an entire reading, we are primed for patterned language, and this blurriness into everyday speech creates an interesting gap or overlap.” Eric Baus, “Granular Vocabularies: Poetics and Recorded Sound.”

As part of my residency with the Archive of the Now, I’ve had the opportunity to listen to Archive recordings with A-Level students from various schools. As Eric Baus observes in his key article on what happens when we listen to recordings of poetry, “we are primed for patterned language,” and we found ourselves listening to the “gap or overlap” between poetic and everyday dictions – particularly at the site of repetition.

We listened together to Chris McCabe‘s Teenage Riot, Daydream Nation, and we heard [italics indicate participants’ comments as presented in the gallery above] the solid, harsh reality of “bricks” meet the emphasis on “in” that made “love” solid amongst the chaos. One participant created a cut-up through listening, asking “Can build us up from / this world to the next,” while another entered into the teenage riot subjects of the poem, noting “Youth are in fear of unknown.” The movement from granularity – focusing on repeated sounds, words, patterns – to larger epistemologies of love, fear, power and transcendence mirrors the poem’s own movement from/between “bricks” and “skies.”

Baus argues that it is the particularity or granularity, the individual bricks of assonance, tape hiss, pause and pronunciation, that “engage[s us] in an expanded mode of perceiving,” but I am also interested in the durational aspect of listening to poetry, and how that might differ between a live performance and a recording (with its timer display and pause/fast forward buttons, and ability to listen again) – and especially the durational aspect for group listening: what kind of attention does it produce? What expectations or affects does it engage?

We talked about listening to music and the different qualities, moods and engagements available to them, and how that might act as a framework for poetry. It was clear that for the student participants, neither the technological presentation nor the unscored spoken word presented a barrier to accessing meaning, politics, poetics or affect; in fact, both aspects offered a freedom to engage with the texts through their own words and pre-occupations. This is suggestive of a new (or renewed) relationship with poetry as an inner, intimate soundtrack, an “expanded mode of perceiving” because of an expansive ability to inhabit – by moving – the words. There is an important difference between the pinpoint focused mode of listening Baus might be describing – an academic or analytic mode – and the possibilities of a diffuse mode that could be called “night bus” listening. What kind of physical and political scapes could poems from the Archive layer or speak to?

That’s one reason I asked the student participants to write on the wall (well, on flip chart paper blu-tacked to the wall): to surface that possibility of poetry in (impacting) the environment. IN love like INtent: what might it mean to read the digitality of these recordings as an opportunity to embody and inhabit them, rather than to engage them at a distance? As Sandy Stone notes in The War of Desire and Technology at the Close of The Mechanical Era, we live intimately with our prostheses: that’s what makes them effective, that they are an extension of our bodies. Could digital audio recordings be a way to remake this connection to the poem, and the connection of the poem to the physical and political environment?

where should be force, a jack & a plug,
“kiss me in shadow” written on their fists,
You’re cut she sd, your electrics out,
cut, cut out. But no, there is no force like the first
time’s frost, you touch this echo & this loop,
when you fell the tannoy spoke
FIRE IN SHOPFRONT IN TOTTENHAM HALE