The Archive is hosting a poet-in-residence for one month until 17 March.

Cristina Judar is a writer from São Paulo, Brazil with a postgraduate degree in Cultural Journalism. Her first book, Lina, came out in 2009 and received the Cultural Action Grant in the Graphic Novel category, awarded by the State Secretary of Culture in São Paulo. In 2011, she published her second book, Vermelho, Vivo [Red, Live], which also received the Cultural Action Grant. Her latest book, Roteiros para uma vida curta [Scripts for a Short Life] received an honorable mention at the 2014 SESC Literary Awards. Cristina also writes Luminescências nas Pickups [Luminescence on Pickups,] a blog dedicated to fiction and is working on her first novel Oito do sete [Eight of seven].

This residency has been sponsored by the Brazilian Ministry of Culture and the British Council. She is developing a literary project for the Archive of the Now which fuses prose and poetry inspired by interviews with Londoners. This will culminate in a pop-up exhibition on the QMUL campus in the week of 9 March. 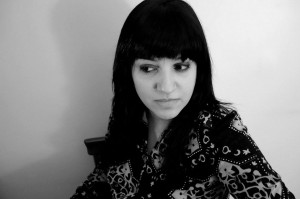