Cutting Up the Archive: Practice

A fabulous strike day teach-in led by Dr. Katy Price, and undertaken with gusto by a collective of students (who kindly gave me permission to reproduce their poems here), reminded me of the power of the cut-up: for releasing rage against the [textual] machine (or the text-machines we are supposed to be in academia, it feels), and for generating striking new ways of speaking.

After my cut-up experiment with Infinite Difference recordings from the Archive, a participant in Syndicate asked if I could write a tutorial on audio cut-ups, so here it is: a practicum on intervening in the Archive.

This is the non-technical part: your methodology. I decided to cut up the first five minutes of a video recording of a lecture by Anne Cvetkovich about the queer archive (more on whom in my subsequent theory post). I decided I would take 10-15 second segments of the recording that caught my interest – not necessarily complete sentences – and intercut them with material from the Archive.

Based on Cvetkovich’s name, I decided to use the first four poets whose surnames begin with C (in the Archive’s index, as of 1 March), and use the first 45 seconds of their fourth poem (or last poem, if they didn’t have four). The track I made is: CutupCounterarChive, and I uploaded it onto SoundCloud.

There are many tools you can use to edit mp3s, including QuickTime. I used Audacity  because it’s open source, free to use, and offers an audio recording tool as well. It’s also fairly intuitive.

I downloaded mp3s from the individual poet’s pages on the Archive, and extracted an mp3 from a YouTube video via video2mp3.

Once I had all my mp3s, I opened Audacity and created a new file: this would eventually be my cut-up track. I then copied (dragged) the first mp3 I wanted to cut up into Audacity, so it opened in its own window. 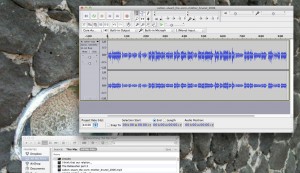 Once I’d listened to the mp3, I knew what I wanted to clip. Audacity is automatically set to the “mark” tool (what looks like a capital I in the toolbar). It creates a pointer when you move it over the audio waves. Click at the beginning or end of your clip, and drag forwards or backwards until you have a shaded area covering the material you want to clip. 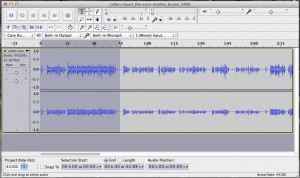 You have two options now: you can delete the shaded material (useful for cutting out glitches — or creating them!) or you can copy it, exactly as you would in a Word document, and then paste it into the empty project file. 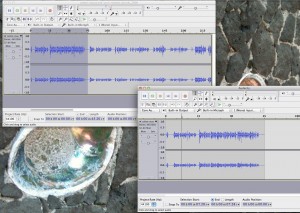 You can move the clip to anywhere in the timeline using the Time Shift tool: click on the double-headed arrow in the toolbar (highlighted below) and move it over the section of sound you want to move. This allows you to join two sections of sound together, or to re-order them. 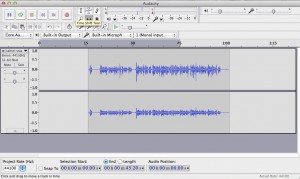 If you switch back to the marker tool (I), you can select your newly-conjoined clips and play them through, or select just a few seconds either side of the join to listen to the transition.

Are you hearing the end of a word or a gulp or breath that you’d rather wasn’t there? It can be hard to clip exactly, especially with fast-paced speech. Audacity offers a Zoom tool (yep, click on the little magnifying glass) that lets you expand the time scale down to milliseconds.

This means that the time indicator whips past when the track is playing! My rule of thumb is to zoom in until I can see the flattened areas that mark silence or almost silence fairly clearly: that’s where I want to drop my cut, cleanly between words.

This screen-grab shows the process of clipping five seconds from a very fast speaker. 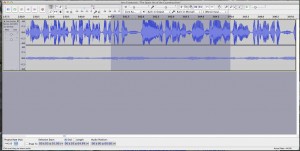 Then I can zoom out to see the whole track: this one consists of nine clips of sound from five different mp3s. It’s easy to see which are poetry and which are academic prose from the relative density of the sound waves! 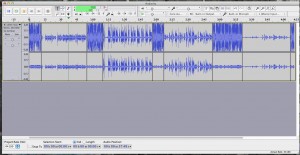 Once you’ve played your cut-up track through, zooming in for final edits, zooming out for an overview, perhaps making a new cut and dropping a clip into it from elsewhere, save the project — and export it. 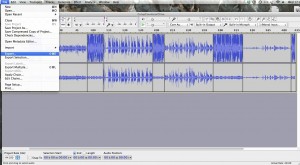 I exported mine as an mp3 for easy upload to SoundCloud, and to play in iTunes, but there are multiple (higher-quality) formats available. Being an (An)Archivist, I also added some category data that will be encoded into the mp3 — so if anyone downloads it, they will know the names of the speakers, etc. 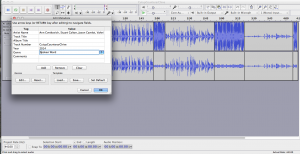 My poets were: Stuart Calton, Jason Camlot, Vahni Capildeo, and John Cayley. SoundCloud is a free sound hosting and streaming site, and you can make your uploads public or private. And the photograph hiding behind Audacity was taken at La Casa Azul, Frida Kahlo and Diego Rivera’s house in Mexico, DF, a living archive. Kahlo collaged directly onto her body casts.