After Turing: A Digital Poethics

Following in the Christmassy footsteps of Vladimir Putin and his cheery amnesty for activists who should never have been in prison, the Queen has issued a pardon to Alan Turing, under the Royal Prerogative of Mercy, sixty years too late. In 1952, Turing was sentenced to chemical castration after being convicted of gross indecency for a consenting relationship with another adult man.

I wonder what Turing would have thought if he could (have) see(n) Pussy Riot using the technological advances that resulted from his work on computing to share their Punk Prayer, which opens with the lyric “Gay Pride sent to Siberia in chains.” Digital cameras, YouTube, Twitter… all these have become tools for digital arts as well as activism, and have their deep roots in the code-breaking at Bletchley Park and Turing’s ideas about machine intelligence.

The more customary association between Turing and digital poetics is that of the Turing test, a philosophical problem usually stated as testing whether machines can think – and articulate that thought in such a way as to convince humans that the source of the articulation is human, not a computer. Turing’s thought on the question developed through the 50s (documented beautifully here), and the phrase has become a standard referent, particularly for projects in computational creativity.

According to Stephen McGregor,

Margaret Boden’s book The Creative Mind is often taken as the Urtext for the general field of computational creativity.  QMUL’s own Geraint Wiggins has written a more concise formalisation of Boden’s framework for creativity And Geraint and Simon Colton have written a fairly approachable treatment of the subject, marked by their own affection for popular science fiction.

Computational creativity takes artistic practice as one of the distinctions between human and machine processes – something that has been challenged by constraint-based writing since Mallarmé’s enquiries into the throw of the dice. Unlike, say, haiku generators, poets engaged with generative constraints could be said to be trying to pass the Turing test in the opposite direction: to disengage from the Romantic self, and write as an automaton, often engaged with principles of randomness, error, and non-sense.

So a more complex philosophical, if not programmatic, Turing test could be formulated, enquiring into the poethics of our engagement with the machine as mirror, prosthesis, weapon, tool, transparency, medium, mask, megaphone, soapbox, sandbox… A Turing poetics – a computational creativity inspired by the scientist’s life and work – could be one that explores difference, rather than trying to conform or convince. A machine that revels in being machinic or hybrid; a critique of creativity as the highest form of (human) consciousness. Releasing the monkeys from their Shakespeare assignment.

E-poetry, the longest running international digital literature event, hosts projects from both directions or philosophies, something I got to taste at a similar event hosted by Samantha Walton, Jow Lindsay and Lila Matsumoto in their technology and poetry series Syndicate, which has just come to a storming close. Some of the guests at the final night were kind enough to share some ideas for the future of the Archive.

The suggestions range from the practical (easier access to downloads, new ways to work with them) to the expansive (more Scottish poets!) to the ideological (kitten videos + poetry + Prynne), querying how the Archive blends with or stands apart from the flow of digital information and internet trends. In general, the poethics suggested here moves towards the accessible, the cumulative, the diverse, the interventive… 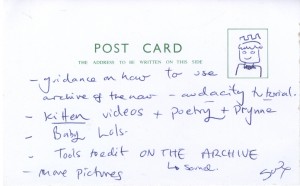 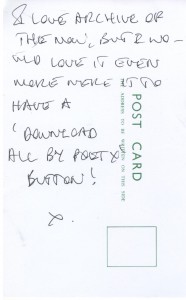 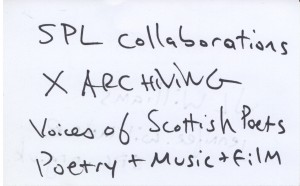 As Turing, a keen chess player, might have said: your move.