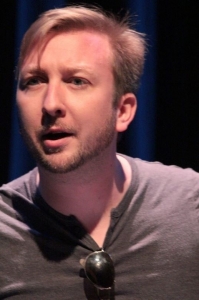 David is a poet, critic and publisher. His written work includes three poetry collections published by Veer books — Xaragmata (2013), Orcs (2015) and Sedition Machines (2017) — a cultural geography of the London Underground published by Liverpool University Press, and a cultural history of Modernist Egoism published by Bloomsbury. As the editor of Contraband Books, David has published some of the most exciting innovative poetry currently produced in the UK, his published authors including Nat Raha, Eleanor Perry, Linus Slug, Juha Virtanen, Harry Gilonis, Verity Spott, Jen Cooke, and many more. He is currently working on a long poem relating to the East India Company and a collection of essays exploring Promethean horror in twentieth-century fiction and art.

Medicate to lessen what’s intimate in sorrow,
or talk, talk it over –

all this choice in reasons, in the render,
and it’s just between you and no-one in particular, a value one-to-one.

Faith in a reflecting surface – I confess, no inner life to speak of
and a thirst for outerness. From sip to gulp a zepto sec,
so multiply. Still no quench.
Sensation consumption, max and no check:  where’s that exteriority heading?

Para-diagnose and park it, self-drug.
In any case, less self, thanks, and a quest for structures of the collective.
I know, the good future’s old-fashioned.
Belonging to sharing needs activation. It doesn’t scratch a plan for let’s get off this planet.
There’s so much space, together.

grab yourself a leg-up, grip justifies grasp, use your stealth, hot royalize.

Can this weight, this velocity be used?
It doesn’t start with choice, with unit of “you”, how any one might feel.
Privilege polices the pre-sets , trumpets its come-the-innocent  equal opportunity / “just join-in” .

It’s a way of lifestyle, a shield formation, the self-special,
aggrandised gangs hoarding elegance and “give the hordes a kicking, example serves”.

Etch a plan for let’s get off this planet. There’s so much inner space, out there, together.

“David Ashford’s Xaragmata is just about the most amazing stuff we have seen in the last 20 years. A fascination for mathematics, objects constructed by numbers, and archaeology helps to push this language into the realm of dazzle and darkness. … all points on the horizon of knowledge, where haze merges into darkness. We see the first known examples of the cultural systems we use and also a zone where they merge into something else.” — Andrew Duncan

“David Ashford’s book takes us into a realisation that these beings called Orcs might be a symptom of how history has been taken away from us, in other words that it can’t be written except with the aid of imaginary beings of this type… Ashford’s prose, which is also poetry, is a probe into the particular (human) energies that animate these non-humans and in the process radically interferes with the language of Tolkien’s nasty anti-modernism, getting help from Blake, Benjamin and others. Of course Orcs are mainstream popular, given their presence in gaming and film. Ashford exposes their link with the entropy of England. Enjoyable and necessary work.” — William Rowe

“In the crossing of duplicity and revolution there are vestiges of linguistic forms which come into our mouths, but when we try to speak them, only splinters are left on the tongue. These sequences try to speak urgently of the law only to find that to do so is to speak twice over oneself as multiple scripts combine. Languages have transformed life at the widest scale: Ashford looks to follow those places where the transmutable lies within the power play of the merely translatable – in order to rewrite what happened next or expose what the hybrid word for word systems of containment couldn’t quite void.” – Edmund Hardy