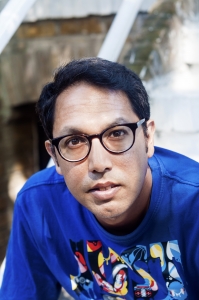 Rishi Dastidar’s poetry has been published by Financial Times, New Scientist, Tate Modern and the Southbank Centre amongst many others. His work has featured in the anthologies Adventures in Form (Penned in the Margins) and Ten: The New Wave (Bloodaxe). His debut collection Ticker-tape is published by Nine Arches Press, a poem from which is included in The Forward Book of Poetry 2018.

A fellow of The Complete Works, the Arts Council England funded programme for BAME poets, he is a consulting editor at The Rialto magazine, and also a member of the Malika’s Poetry Kitchen collective. He serves as a chair of the London-based writer development organization Spread The Word, and teaches for the Poetry School.

A leopard parses his concern

1. I am concerned about Claudia Cardinale.

4. By ‘I sigh for’ I mean ‘my eyes are hungry for her when she appears on screen’.

8. By ‘endure’ I mean ‘wait in the hope that she might, like a god, pick me out to benoticed, even though I have done nothing noticeable’.

9. By ‘pick me out’ I mean ‘not actually come near me lest my reserves of charmdesert me at a highly inopportune moment’.

11. By ‘darkened’ I mean ‘the presence of Lampedusa will be evident; he will besitting in a green damask armchair, his walking stick tapping out the beat of a fugue’.

12. By ‘fugue’ I mean ‘a Morse code translation of his most famous quote’.

13. By ‘quote’ I mean ‘the only appropriate approach to living’.

“the reader is primed for the poems inside that pop and fizz with wit and modernity – rather like the way the neon pink fluorescence of the cover catches and holds the eye in its day-glo glory. And that quirk of title is indeed reflected in the distinctive tone of the poems themselves. It isn’t so much that the poet sounds like no other. That’s close to the truth but it’s nearer the mark to say that the poet sounds entirely like himself, with a gaze firmly fixed on the digital, pop cultural and musical here and now.” – Dzifa Benson on Ticker-tape in Wasafiri

“Rishi Dastidar, like MacNeice, relishes making catalogues; like MacNeice, Dastidar is also fascinated by idioms, clichés and the hidden codes behind them.” – Jeremy Wikeley on Ticker-tape at London Grip