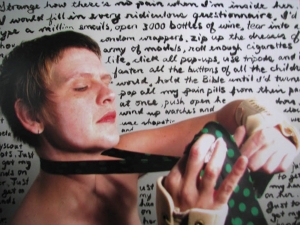 Sandra Alland is a writer, filmmaker, performer and interdisciplinary artist. She has published three books of poetry and one chapbook of short stories. Her work has been presented and published by entities including Edinburgh Book Festival, Tate Modern, GoMA, Gutter, subTerrain, Coach House Books, Edinburgh Filmhouse, The Arches and Soho Theatre. Recently Sandra edited a special edition on Scottish poets for Jacket2, and co-won Canada's 2013 bpNichol Chapbook Award.

This recording was made at 'Inky Fingers' in Edinburgh on 4 February 2014.

La época dichosa/Delightful Could Be Justice

Or: I'm not that, they think.
They don't dimensional;
blues their disease. And one open to be
the impulse ceiling.
They don't that, may not think that.
They are that, each when
they want to enact what the land,
born to be in theft and Esso,
mirrors into one sun.
Then a girl –
can it be a
lap? – that
if that they have (lap), that
(with kiss) a landowner!
But lawyers did, you will,
the band will. A new now.

On Blissful Times: 'A rather amazing tour de force showcasing poetry's aptitude for invention and re-invention... Blissful Times, clearly, pays homage to [Samuel Beckett's] Happy Days. At the same time, Alland's text rejects the static, hopeless vision of human existence which characterizes the plays of the Theatre of the Absurd... Alland replaces this Absurdist vision of meaninglessness with a dynamic – indeed, radical – political vision... Blissful Times is a disarming text, playful and entertaining, yet troubling.' –John Stout, Open Letter: A Canadian Journal of Writing and Theory, 2009

Other reviews of Blissful Times